The severity of the impact of a COVID-19 outbreak at a British Columbia mink farm will depend on the ability of authorities to contain it in a single facility, experts say.
The province confirmed that 200 mink from the farm had died on Friday, possibly from the virus. This came days after testing revealed at least five mink at the facility tested positive for COVID. Eight workers also tested positive.

The farm has not been identified “due to potential safety concerns,” according to the Ministry of Agriculture, Food and Fisheries.

Sally Otto, a mathematical biologist at the University of British Columbia, said mink farms are ideal breeding grounds for viruses, due to the proximity and high rate of contact between animals.

“The real danger is that it spreads from farm to farm,” she said.

“In other US jurisdictions, thousands of mink have died, and as you know in Denmark they have slaughtered across the country to reduce the risk of mink becoming this very large reservoir of COVID which can then mutate and change and potentially come back. in humans. ”

Earlier this year, Denmark slaughtered 17 million animals after evidence showed animals could transmit a mutated form of the virus to humans.

Alan Herscovici, founding editor of truthaboutfur.com and former director of the Fur Council of Canada, expressed confidence on Saturday that the outbreak could be contained.

“What this means is that access inside and outside the farm was kept to a minimum, with people coming into contact with the animals – as we do with each other – putting masks, PPE, a different coat… if workers come to work well, they should be tested before they come into contact with animals, ”he said.

Herscovici said that in Denmark, 1,100 farms with millions of animals were clustered in an area the size of Vancouver Island, arguing that the Canadian industry was much smaller and larger.

[ Sign up for our Health IQ newsletter for the latest coronavirus updates ]
“You don’t have the same risk of contagion at all,” he says.

“This concentration that they had in Denmark was a big advantage for them… it made them very effective, but unfortunately when they were hit by this virus they became their downfall.

According to the most recent statistics from Agriculture and Agri-Food Canada, there were 98 mink farms in Canada. The BC SPCA says there are 13 farms in BC, most of them in the Fraser Valley, that harvest more than a quarter of a million animals each year.

Mutations in the virus carried by Danish mink have since been less worrisome than originally thought, said Dr. Jan Hajek, an infectious disease specialist at the University of British Columbia.

Hajek said the initial concern that mutations would make the virus immune to COVID-19 vaccines under development has not been confirmed.

However, research suggests that it could affect COVID-19’s ability to resist antibodies, such as those used in Regeneron COVID-19 therapy, he said.

Hajek warned that the spread of COVID-19 in mink, or beyond, in other animals, could lead to other problems.

“One of the risks could be that it gets into these other host animals and sets up a reservoir, and once we get over our pandemic and get better, it could start again and come back to re-infect us,” he said. he declares.

Animal rights groups are clear in their position that the industry benefits are not worth it.

Rebecca Aldworth, executive director of Humane Society International Canada, described the farms as “factories of poverty” and argued the industry should be shut down. 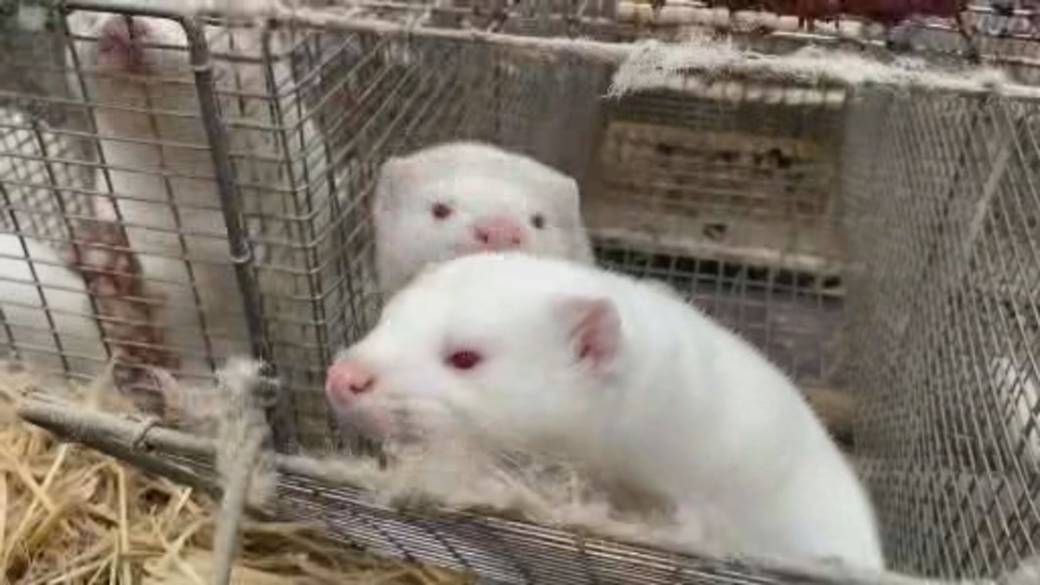 Aldworth said the animals are confined to inhumane conditions, where they show obvious signs of psychological stress.

“They are very intelligent semi-aquatic animals that roam huge areas in the wild,” she says.

“On a mink farm, they are crammed into tiny sterile wire cages, placed on rotting excrement. The smell and the sounds are just overwhelming.

The current COVID-19 outbreak is a chance for people to learn how farms operate, Aldworth said, adding that she hoped it would increase public pressure against the industry.

According to provincial officials, the epidemic remains confined to a single farm, the majority of minks do not show symptoms and the death rate has “slowed in recent days”.

The source of the original infection remains under investigation, although the Agriculture Ministry says that due to the isolation of the farm, a worker most likely transmitted the virus to animals.

He said ministry staff had inspected all mink farms in the province to ensure compliance with standard biosecurity measures and improved COVID-19 practices.

Charlie LeDuff on prosecution of Whitmer for information on number of COVID nursing home deaths: “I’ve been asking for months”

Verification of the Republican critical facts of the Covid-relief package

Some pharmacies in Toronto, Kingston and Windsor areas will soon be offering COVID-19 vaccines

Coronavirus Texas: Houston nurses and doctors look back on COVID-19 a year later

‘I’m afraid we are going numb’ to Covid numbers

Nicola Sturgeon missed six meetings on the Cobra coronavirus as the virus tightened its...