Devin Haney sent a warning to the lightweight division after defeating Yuriorkis Gamboa by unanimous decision. The two faced off, with Haney defending his WBC lightweight title against the 38-year-old live on DAZN. Haney said this was just the stepping stone, and there’s more to come; he wants all the great fights to happen.

Speaking to Fighthype.com on YouTube shortly after the fight, Haney first explained why he didn’t get the knockout. He said, “Yes, I wanted to knock him out. I knew he was durable and that he would try to survive, but… I thought I could get him out of there but this mother *** uh stopped me.

The undefeated 21-year-old also admitted he wanted the knockout to make a statement. “I wanted the KO. The key was to get the knockout. But like I said, it was just a stepping stone. It was a good experience for me, but the fights I want are the big fights; you know, that’s what it is.

Devin Haney talks about the lightweight division and his upcoming fights.

Gamboa’s power did not impress Haney, who claimed he felt nothing. He said, “Honestly, surprisingly, he didn’t hit hard at all. I thought he would have some power. This suggests that he has not been tested to the level of which he is capable.

He then gave his opinion on Ryan Garcia and the lightweight division. He said, “Ryan Garcia didn’t show he wanted to beat me, you know. He said it wasn’t really a fight he was looking for. The fights I’m really looking for are the title holders.

He went on to say, “If the fight with Ryan Garcia is happening, it is. But I look forward to the title holders. I want to fight… I want to win all the belts. 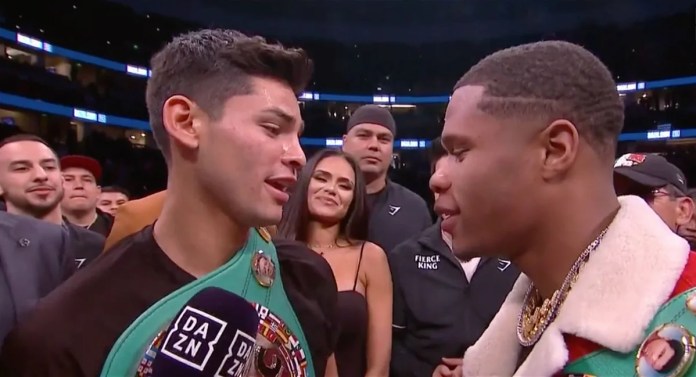 This is good news for combat fans. First, Teofimo Lopez said he would like to fight Haney, now Haney said he wants the big fights. It’s a perfect situation for all parties. Hopefully the business side of things can be worked out and we can see one of these “big” fights sooner rather than later.