Tesco has said everyone is on Santa’s Villain List this Christmas in their uplifting new festive ad.

The UK supermarket chain’s humorous ad taps into the everyday shortcuts many of us have taken in 2020, ranging from giving questionable hairstyles to sensitive topics while being homeschooled.

The campaign urges shoppers to forget their naughty getaways and stock up on festive goodies.

On Britney Spears Oops… I Did it Again, the ad opens with a little girl looking longingly at a tasty party cake at a Tesco branch.

Tesco has said everyone is on Santa’s Villain List this Christmas in their uplifting new festive ad. The ad opens with a little girl looking longingly at a tasty party cake at a Tesco branch – who then admits to giving her sister a terrible locked-out haircut

Looking anxious, she admits that she gave her sister a really terrible haircut and exclaims, “What if I’m on the villain list? “

A voice is then heard from the tannoy supermarket announcing: “Relax, after this year Tesco says there is no naughty list, so take this cake, you deserve it!”

The scene then shifts to a father standing at the window of his house, who admits, “I may have bought too many rolls of toilet paper.

As the camera zooms out, rows of toilet paper can be seen on a shelf behind him, while a little boy in the snowy garden uses a lot to build a snowman.

The scene then shifts to a father standing at the window of his house, who admits, “Maybe I bought too many rolls of toilet paper”

Another man, dressed in a Santa hat and holding a freshly cooked roast turkey, confesses to forgetting to sing Happy Birthday while washing his hands, and mother of four admits she didn’t teach physics or math to her children during homeschooling.

His cheeky son then quipped: “Or geography! – and receives a scowl from her mother as she helps herself to an appetizer.

He then passes a young man on a roundabout, who admits he didn’t donate to Sir Captain Tom.

The music then stops, the previous characters sounding appropriately indignant, until the boy turns back and reveals that he participated in a charity bake sale.

Even Santa Claus makes a cheeky confession before enjoying a chopped pie, revealing that he “could have gone on vacation” this year.

The ad ends with the voiceover urging Brits to have “all the goodies they want” because this year at Tesco there is no naughty list. 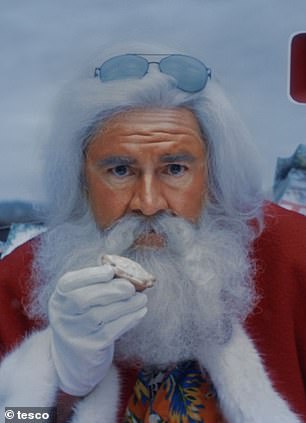 Even Santa Claus makes a cheeky confession before enjoying a minced pie, revealing he “could have gone on vacation” this year

Alessandra Bellini, Director of Customers at Tesco, said: “We know that the festive ads mark the start of the season for a lot of people – 27% of the country in fact – and that this year customers were looking for something fun. . and uplifting, it would help spread some joy.

“When we discussed the concept with friends, colleagues and clients, everyone immediately confessed to the naughty things they did in 2020 with a wry smile.

“It’s really relatable and we hope it resonates with people and gets them talking.

The concept was developed by creative director Tom Drew of BBH and directed by Raine Allen-Miller of production company Somesuch.

The TV ad is voiced by acclaimed comedian Asim Chaudhry and premieres tonight during ITV’s The Voice.

Growing investors: is this title the next Shopify (TSX: SHOP)?

“It’s so devastating”: Olympic delay is particularly difficult for gymnasts