The Ontario government is reporting a total of 2,855 cases of COVID-19 among students in schools since classrooms reopened, including further school closures.
According to the provincial government, 86 cases reported today are student-related, 15 are staff-related and one has not been identified. Ontario schools reported 102 cases in 24 hours.

The new total has now reached 4,573 since the start of the school year.

There were 1,185 school-related cases in just two weeks, of which 3,388 were reported 14 days or more previously.

The numbers are announced daily at 10:30 a.m. on the province’s schools and daycares coronavirus tracking website.

Of the total cases recorded since September, about 62% were from students.

The province reports four school closures out of the 670 schools that have cases.

As for licensed child care centers, there are now 762 confirmed cases in total with 127 centers and 452 homes closed. 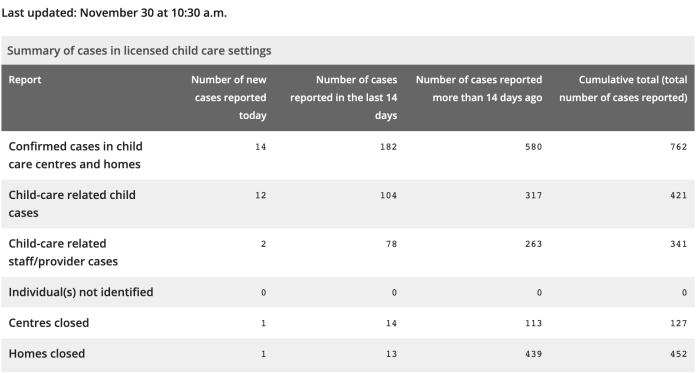 As of Monday morning, the provincial government confirmed 1,746 new cases of COVID-19, including more than 600 from Toronto.

Daily UK coronavirus cases exceed 50,000 for the first time this week as 1,280 deaths have been reported

Coronavirus: Concerns About Cases of Covid-19 in NI Meat Plants

Santana Row restaurant calls for closure after COVID-19 is discontinued

Here is what it looks like the whole sky through the eyes of the...

Coronavirus: “The nursery I run may not survive”