A medical worker wearing protective gear takes a swab sample from a man for a COVID-19 PCR test at a temporary screening center outside the city hall in Paris, France, August 31, 2020. Phoro: Xinhua

With a record 42,032 new confirmed infections in the past 24 hours, France had a cumulative total of 1,041,075 COVID-19 cases on Friday, becoming the second European Union (EU) country to cross the bar million after Spain.Spiral trend

Data has shown that the spread of the coronavirus is on a spiraling trend in Europe. Record daily records are being updated more frequently in many European countries in the midst of the second wave of COVID-19.

At 3.34 p.m. CEST on Friday, two EU countries, Spain and France, were among the top 10 countries in the world with the most confirmed cases on the World Health Organization scoreboard. health (WHO). The UK ranks 11th with 810,471 confirmed cases.

While these large European countries have grabbed the world’s attention with their caseload, some of their smaller peers are more of a concern in terms of incidence rates.

Stores on a commercial street are closed amid a lockdown to curb the spread of COVID-19 in Prague, Czech Republic, October 22, 2020. Photo: Xinhua

According to the European Center for Disease Prevention and Control (ECDC), on Friday the Czech Republic and Belgium were the only two countries in the EU / EEA and the UK with the cumulative 14-day number of COVID cases -19 per 100,000 over 1000. The Czech Republic (1148.5) and Belgium (1019.8) are much higher than Spain (379.1) and France (488.6). ECDC has developed epidemiological criteria to classify the epidemiological situation in countries as “special concern” or “serious concern”. Countries whose epidemiological situation does not meet the criteria for being either of them are classified as having a “stable” situation.

On Friday, only six European countries, namely Cyprus, Estonia, Finland, Greece, Liechtenstein and Norway, were classified as “stable”. Still, the agency warned of continued transmission between them, saying the situation needs to be closely monitored.

Despite the drastic resurgence of the pandemic across Europe, most countries on the continent have resorted to varied, refined and targeted measures rather than a blanket lockdown adopted in the first wave in an attempt to contain the spread of the disease. virus.

Italian Prime Minister Giuseppe Conte said on Friday that all measures must be taken to avoid a second national lockdown, as a recent spike in new coronavirus cases has heightened fears across the country.

In a video speech at the Work Festival 2020, Conte said the goal was to “contain the infection and prevent a shutdown of production and work activities, as well as the closure of schools and public offices. “.

“We must avoid a second widespread lockdown, and to do this we must be vigilant and ready to intervene anytime, anywhere it is needed,” said the Italian Prime Minister. 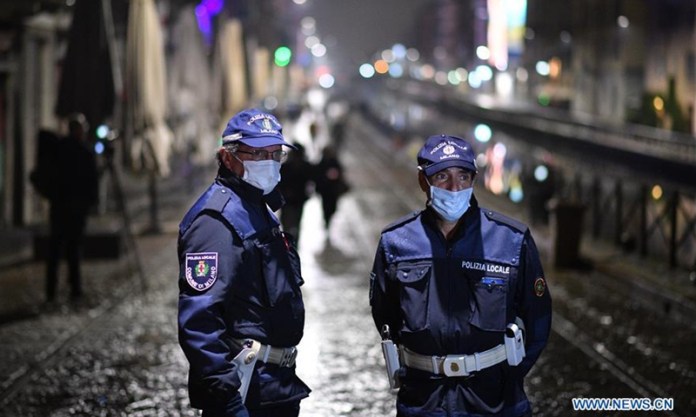 Police officers patrol a street amid a spike in new coronavirus infections in Milan, Italy on October 22, 2020.Photo:Xinhua

Italy has so far responded by implementing increasingly restrictive provisions, including a ban on private parties.

While the general lockdown is avoided by most European countries, the curfew has become a major option for many of them to deal with the second wave. Several hardest-hit European countries, including Spain, France, Germany and Belgium, have instituted curfews at least in parts of their territory.

Some countries have even opted for partial lockdowns. The Dutch government announced a “partial lockdown” last week to stop the spread of the new coronavirus in the country.

More and more countries are fine-tuning their restrictive measures, in particular by extending the compulsory scope of wearing masks and reducing social bubbles.

With anti-virus measures, Europeans are learning to live with the virus, at least for now.

Based on scientists’ projections, French President Emmanuel Macron told reporters on Friday during a visit to a hospital in Pontoise, north-west of Paris, that the French must live with COVID-19 at least until see you next summer.

“The question is, how do you live with the virus during this time? In the phase in which we are, we have no other choice… That is to say to reduce our social life to the maximum, to limit the contacts and to break its circulation ”, he said.

Ensuring that hospitals are not overwhelmed by the impact of the second wave has become a priority for many European governments.

Latvian doctors were also concerned that the healthcare system would become overburdened at some point, with COVID-19 patients quickly filling hospital beds.

WHO Director-General Tedros Adhanom Ghebreyesus told a press conference on Friday that “too many countries are experiencing an exponential increase in cases and this is now leading to hospitals and intensive care units nearby or above their capacity and we are still only in October ”.

As the world struggles to contain the COVID-19 pandemic, countries like Germany, France, Italy, China, Russia, Britain and the United States are rushing to find a vaccine.

According to the WHO website, as of October 19, 198 COVID-19 vaccine candidates were in development around the world, and 44 of them were in clinical trials.

France has another flagship product: the 2021 DS 9 will go on sale in Europe

As deforestation in the Amazon reaches its highest level in 12 years, France rejects Brazilian soybeans

England vs France live stream: how to watch the Nations Cup final for free

When did England vs France? Fall 2020 Nations Cup final date, kick-off time, team news and how to watch