French police are investigating a series of mysterious “barbaric” horse murders involving the mutilation of the bodies of animals that have stunned rural France.

The last one in Cortambert, a village in the Saône-et-Loire region, occurred on Friday night.

The one-year-old filly’s right ear was cut off, one of her eyes was gouged out, her neck was cut, and her genitals were cut.

But the police are struggling to identify the perpetrators or find any motivation behind the cruel killings, and probe for possible satanic links.

A woman discovered the body of a horse over the weekend that had been mutilated, and was the latest in a series of similar cases in France that have shocked the rural community. Pictured: Horses on pasture, Guillestre, France (file photo)

A woman discovered the horse over the weekend in an isolated meadow while walking near the village in the Burgundy region.

A Paris police spokeswoman said there had been around 10 similar cases across France since the start of the year, most in the north and many taking place in remote grasslands.

Jessica Martin, police captain, said: “Everything leads us to conclude that the horse was tortured. It is completely barbaric.

She said there had also been cases between 2014 and 2016 and similar murders and mutilations of horses had been reported in the past in Belgium and Germany.

But the high number in France was unprecedented in such a short period.

“We don’t understand the motivation. Is it a satanic rite, insurance fraud, macabre trophy hunt, or internet challenge? We do not know. It’s very traumatic, ”she said.

She said several different breeds of horses were victimized, as well as a donkey, and mutilation of one ear was a common factor. No meat had been taken from the carcasses.

The latest round of killings began on February 12 this year, when a staff member at the Moselle agricultural school, near France’s eastern border with Germany, found the body of a horse lying in its enclosure.

You a few days later, the son of a racehorse trainer found the body of Demon du Médoc, one ear removed.

Coach Philippe Boutin said: “I think they galloped him and died of heart failure, then they cut his ear. 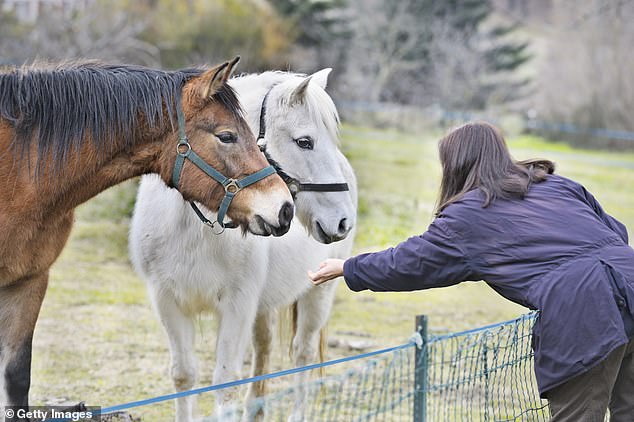 French police said there had been around 10 similar attacks on horses since the start of the year, but struggled to find any suspects or motives behind them

Mr Boutin said he had seen some cases of horses being slaughtered and killed illegally for their meat, but noted that this reason had been ruled out in recent cases.

In one case, a horse had been electrocuted, believed to be with a portable generator, while others appeared to have been knocked unconscious or killed by a blow with a large stone before being maimed.

In April, a two-year-old horse was found dead by the daughter of a woman who was breaking horses.

Stéphanie Gachelin said: “At first we thought it was a natural death, then we discovered traces of injuries and one of her ears was missing. “

Two other horses were found with injuries – on the head and one on the hock, according to the Daily Telegraph.

The national police are helping local investigations into the cases, and France has sent alerts to forces in other European countries, Police Captain Martin said.

In Gaza, parkour gives young people a taste of freedom

Hooker Ghiraldini talks about the times of his career in Italy

David fires Lille at the level of PSG leaders

Europe has tried to limit mass layoffs, but cuts are coming

No more charges laid for Beirut port explosion, including against Hezbollah front man

The Weather Network – Cyclone Harold, the strongest storm in the world as it...