A grandmother died after her cat licked scratches on her arm, causing her to fall into a coma.

The 80-year-old Melbourne woman was scratched by her pet, named Minty, and suffered from bacterial meningitis when the animal licked the wounds in May.

The family found the woman unconscious in bed while the cat was sleeping nearby.

She fell into a coma at Box Hill Hospital in the east end of the city, but woke up after nine days and spent a day with her loved ones before dying.

Devastated family are now coming together to prevent other pet owners from suffering the same tragic fate, reported the Herald Sun.

80-year-old Melbourne woman was scratched by her cat, named Minty, and suffered from bacterial meningitis when the animal licked the wounds in May, spending nine days in a coma at Box Hill Hospital (photo)

The doctor discovered that the cat had given the woman bacterial meningitis, also known as pasteurella multocida, which cannot be treated with regular antibiotics.

Austin Health director of infectious diseases Lindsay Grayson said at least one person a week dies from the unknown dangers of cat saliva.

Cat saliva can lead to horrible complications, including heart failure or blindness, which can be devastating for people with weakened immune systems.

Professor Grayson said that cats carry deadly bacteria such as pasteurelle and bartonelle, which cause “cat scratch disease”.

He said that people should be wary of letting cats lick open wounds.

“This is a big problem and it is increasingly emerging as an unrecognized cause of heart valve infection, which is obviously fatal if left untreated,” said Professor Grayson. 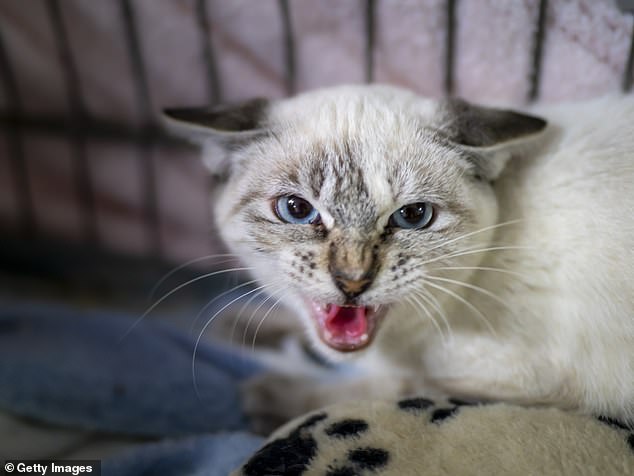 Lindsay Grayson, Director of Infectious Diseases at Austin Health, said at least one person a week was dying due to the unknown dangers of cat saliva (stock image)

Professor Grayson said that anyone with an open sore licked by a cat should speak to their doctor immediately.

The woman’s daughter said that her mother often slept with the cat in her bed.

“Obviously, during the night, she licked the wound and it was the saliva entering her bloodstream that caused the damage,” said the girl.

“I was in shock for a good few weeks. I tried not to hate the cat… but then I sat with him trying to be nice and he also lambasted me for no reason.

The grandmother had suffered from other medical problems due to cat scratches due to her age and anticoagulant drugs.

“I will not take a step outside the line”: an 18-year-old accused in the riot on the Capitol calls for his release

We find real freedom! Boris Johnson welcomes the return of the students

Trump says he will campaign against Murkowski in Alaska next year

Napa’s Grapelord faces a worse threat than the plague

Trump admits coronavirus will ‘probably, unfortunately’ get worse before it gets...

Most Covid-19 Patients Have At Least One Symptom After 6 Months:...