A day after roaring ashore in the form of a hurricane, Hanna lashed the Texas Gulf Coast on Sunday with high winds and torrential rains that destroyed boats, flooded streets and cut power in an area already reeling from an outbreak of coronavirus cases.Downgraded to a tropical storm, Hanna crossed the US-Mexico border with winds of nearly 85 km / h (50 mph), the National Hurricane Center said. It dumped more than one foot of rain over parts of southern Texas and northeastern Mexico.

Border communities whose healthcare systems were already strained by COVID-19 cases – with some patients being flown to larger cities – found themselves under siege from the first hurricane of the 2020 Atlantic season. No immediate deaths were reported on either side of the border.

Dr Ivan Melendez, the Hidalgo County, Texas health authority, was treating a patient overnight in a hospital when he and a nurse noticed water was running down a wall and collecting on ground. The water was circulating through a vent in the room, which had been fitted with a ventilator to create negative pressure and prevent the virus from spreading through the hospital.

After driving home in the storm in the middle of the night, Melendez was trapped in his home Sunday morning by downed trees and had no electricity. He used the phone to discuss whether to put a 58-year-old woman on a ventilator, a decision he felt uncomfortable making without seeing the patient in person.

“You look at people’s eyes,” he says. “You will know if they are desperate. ”

Another doctor decided to put the woman on a ventilator, he said later.

Henry Van De Putte, CEO of the Texas Gulf Coast section of the Red Cross, said the organization would open more shelters with reduced capacity to ensure social distancing. Volunteers and people seeking refuge will undergo temperature checks and a medical professional will be assigned to each location, he said.

A community building known as the “Dome” in Mercedes, Texas, was set aside for evacuees who had tested positive for COVID-19 or were exposed to the virus. Throughout the region, shelters have also been opened in hotels, schools and gymnasiums.

Van De Putte stressed that it shouldn’t take long for people to seek help because of the virus.

“Yes, the coronavirus presents a risk, but so does flood water, so no electricity, so no need for drugs,” he said. “We are doing everything we can to make it a safe environment.”

In the Mexican border town of Reynosa, a maternity hospital was damaged by heavy rains and water had to be pumped out, authorities said. Some patients had to be transferred to the upper floors and a few were evacuated to other hospitals, said Pedro Granados, director of civil protection in the state of Tamaulipas.

Coastal states rushed this spring to adjust hurricane contingency plans to account for the virus, and Hanna was the first big test. Gov. Greg Abbott said on Saturday that some people in need of shelter would be allocated hotel rooms to separate them from others.

Abbott announced on Sunday that the Federal Emergency Management Agency has approved a declaration of emergency that will provide federal assistance.

Hanna exploded ashore as a Category 1 storm late Saturday afternoon with winds of 145 km / h not far from Port Mansfield, which is approximately 210 kilometers south of Corpus Christi.

Myrle Tucker, 83, tried to weather the storm in a motorboat moored in a Corpus Christi marina. But the winds and the rain blew on the windows of the ship. Finally, the dinghy rescuers were able to reach him and bring him ashore. Many other boats were inundated and lashed by the storm. 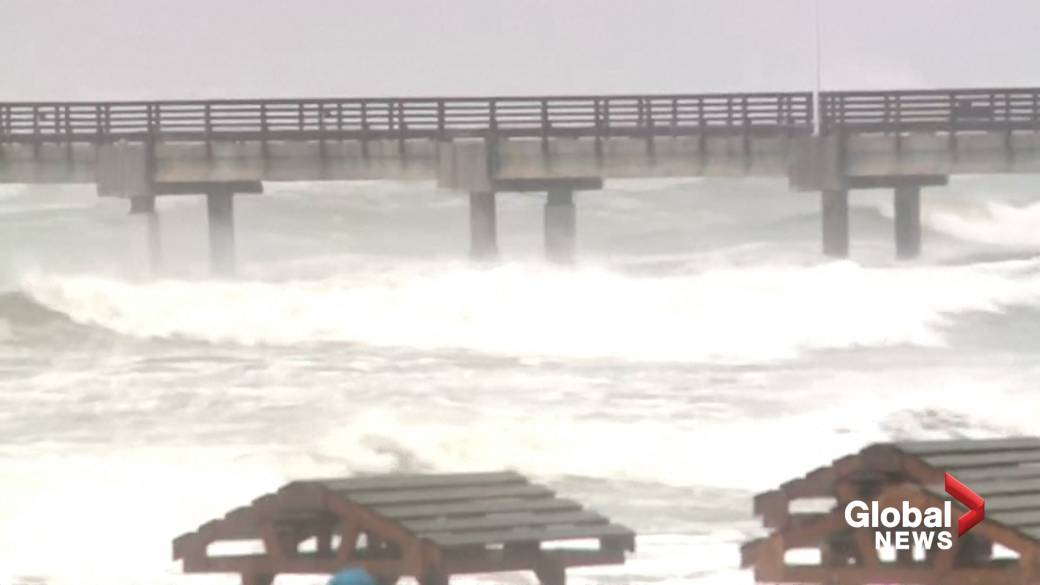 0:45
Tropical Storm Hanna has turned into a hurricane as it heads for the Texas coast

Tucker said he told his rescuers he wasn’t sure he could get out of his boat.

“They came to get me,” he says. “They carried me like a box of towels.

Corpus Christi is in Nueces County, where 60 babies tested positive for COVID-19 from July 1 to July 16. Further south, in Cameron County, more than 300 new cases have been reported almost daily over the past two weeks. Last week was also the county’s deadliest in the pandemic.

Hanna arrived nearly three years after Hurricane Harvey exploded northeast of Corpus Christi. Hanna was not expected to be as destructive as Harvey, who killed 68 people and caused damage estimated at $ 125 billion in Texas.

In the Mexican town of Matamoros, across from Brownsville, rains rocked tents in a refugee camp housing around 1,300 asylum seekers, including newborns and the elderly, who have been waiting for months for dates. hearing under a US immigration policy informally known as “Stay in Mexico.” ”

In the Pacific Ocean, Hurricane Douglas approached Hawaii this weekend.

Lee Ryan applauds the vile trolls who target him for gaining...

Boris Johnson confirms reopening of stores from June 1 while coronavirus...

Netflix Reunites ‘Father Of The Bride’ Cast For Zoom-Style ‘Sequel’ –...