Hong Kong today reported two deaths from the coronavirus as the city battles what authorities have described as a “third wave” of COVID-19 infections.

The financial center, one of the first places affected by the coronavirus, has had impressive success in combating the disease with just over 1,500 infections.

But the China-led region recorded two coronavirus deaths in 24 hours for the first time on Wednesday after the city was hit by a new wave of cases in the past two weeks.

The financial center, one of the first places affected by the coronavirus, has had impressive success in combating the disease with just over 1,500 infections. Photo taken on July 10 shows pedestrians wearing masks while waiting to cross a road in Hong Kong 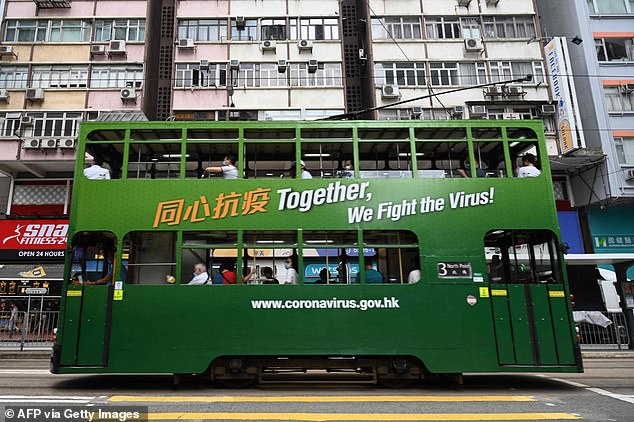 The region ruled by China recorded two deaths from coronavirus in 24 hours for the first time Wednesday after the city was hit by a new wave of cases since July. Photo taken on July 9 shows commuters traveling on a tram with a notice referring to the epidemic

This comes after several cities across China claim to have detected a coronavirus on the packaging of frozen South American shrimp.

In the past two weeks, more than 200 local infections have been recorded in Hong Kong, and authorities estimate that the virus is spreading again in the densely populated city of 7.5 million people.

Authorities confirmed 19 new cases of coronavirus on Wednesday, 14 of which were transmitted locally, as new social distancing measures took effect and authorities warned that the risk of a large-scale epidemic remained high. 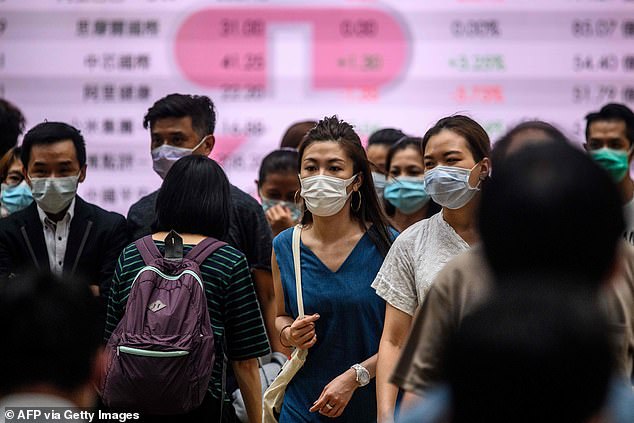 In the past two weeks, more than 200 local infections have been recorded in Hong Kong, and authorities estimate that the virus is spreading again in the densely populated city of 7.5 million people. In the photo, pedestrians wear face masks when crossing a road in Hong Kong on July 10 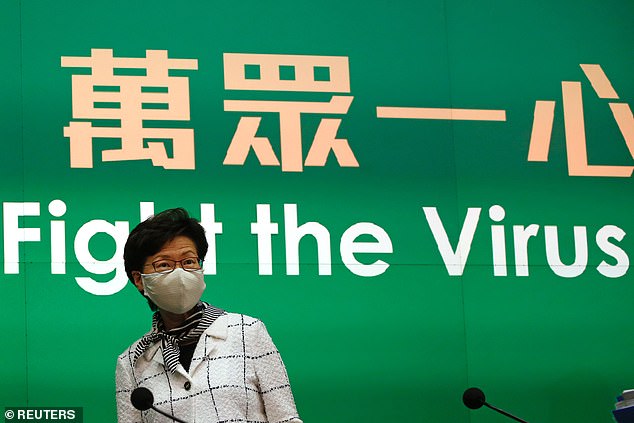 A 95-year-old woman died Monday of the disease, according to health officials.

Another 90-year-old woman who lived in a local nursing home who saw a cluster of COVID-19 infections was declared dead today after suffering from coronavirus.

He was followed by the tenth victim of the city, an 89-year-old man who died today.

To date, Hong Kong has found a total of 1,589 cases of coronavirus and ten deaths.

Authorities have banned more than four people from gathering in public and are forcing passengers to wear face masks on public transport or face a fine of £ 510.

In addition to the ban on more than four people assembling in public, restaurants can only serve take-out from 6 p.m. to 5 a.m., but they can still serve those who eat for breakfast and lunch.

Twelve types of businesses, including gymnasiums, beauty salons, nightclubs and karaoke rooms, are to close.

Some businesses will also be closed and restaurants will be limited when they can serve guests. 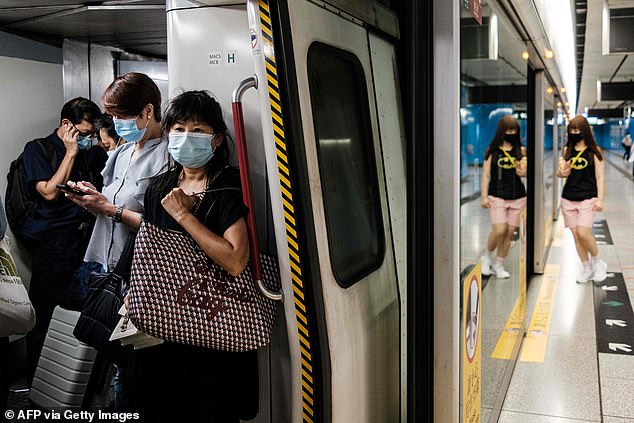 In addition to the ban on more than four people assembling in public, restaurants can only serve take-out from 6 p.m. to 5 a.m., but they can still serve those who eat for breakfast and lunch. Commuters are photographed in a Hong Kong subway on Wednesday 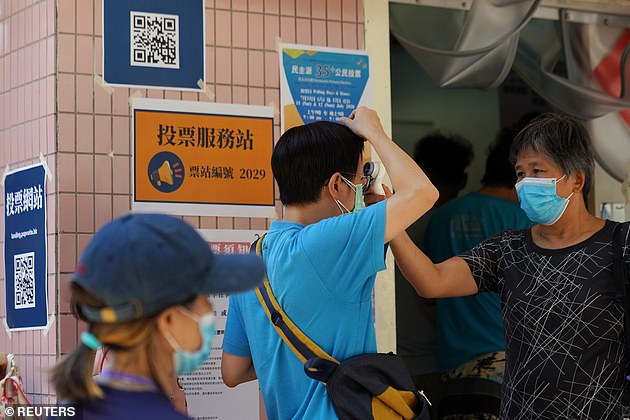 The city has had impressive success in fighting the disease with just over 1,500 infections and 10 deaths. In June, the city detected only a total of 21 cases. Male Citizen Wearing Body Temperature Checked Outside Hong Kong Polling Station July 12

Hong Kongers have widely adopted masks to cope with the pandemic, but on Monday, authorities made it compulsory for the first time to wear a face covering on public transport.

“Now is the time to tighten up,” Lam told reporters, adding that the measures would be reviewed every seven days.

It comes after Chuang Shuk-kwan, head of the communicable diseases branch of the Center for Health Protection, said last week in a press briefing that the Asian financial center has entered its third wave of the coronavirus epidemic, according to South China Morning Post.

She told reporters, “We fear a massive epidemic in the community, with as many sources of infection.”

The announcement is another blow to the city’s economy, which was already bogged down in the recession before the pandemic.

Last year, Hong Kong was battered both by the increasingly aggressive US-China trade war and by seven consecutive months of huge and often violent pro-democracy protests.

Officials in several Chinese cities said they found strains of the coronavirus on the packaging of frozen shrimp imported from South America.

Customs officials said they had detected the virus during recent shipments from Ecuador to regions such as Chongqing, Dalian and Xiamen.

China announced on Friday that it is suspending imports from three Ecuadorian shrimp producers after samples taken from the surface of the package test positive for the disease.

However, tests on frozen shrimp and the inner packaging were negative. 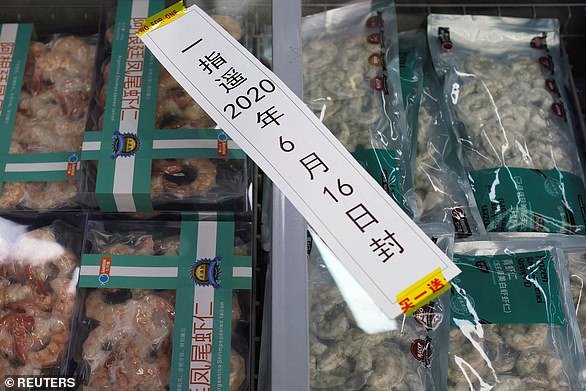 China announced on Friday that it is suspending imports from three Ecuadorian shrimp producers. Photo taken on June 16 shows frozen seafood, including shrimp, inside a sealed freezer in a Beijing supermarket

The results are the first positive results announced by Beijing since it began testing imported frozen food for the virus.

“The results of the tests suggested that the container environment and the outer packaging of the goods of the three companies were at risk of contamination … and that the companies’ food safety management system was not in order”, a said the General Administration of Customs in a statement. statement on his website.

Chinese customs officials have also ordered that shrimp produced by the three companies after March 12 and already imported into China be recalled or destroyed.

China began testing imported fresh and frozen food after the coronavirus was found on a cutting board used to cut salmon on a large food market in Beijing during an epidemic of coronavirus among workers in the region.

Although officials say people will not get coronavirus from eating seafood, many Chinese buyers have suspended imports of salmon and the fish has been removed from supermarket shelves.

COVID-19: Couple and child rescued after camping on the edge of a cliff in coronavirus breach | UK News

No need to ‘despair’ over New York’s COVID-19 variant

Covid vaccine for elementary school children likely to arrive in 2022

COVID-19, a year later: Pandemic created rental crisis in New York City, but hope is brimming with both relief and a real estate rebound

The GameStop, Reddit and Wall Street saga already have two films in the works

Can summer survive the peak of the American coronavirus?