Sky, BT and TalkTalk customers are experiencing a mass internet outage in parts of the UK.

The cause of the problem is a fire at an Openreach building in Newcastle, which damaged cables carrying internet in the area.

The vast Openreach network is used by internet providers BT, Plusnet and TalkTalk, while rival Virgin uses an independent infrastructure.

Thousands of customers have reported problems logging in and making calls from around 12:30 p.m., and this is still ongoing.

Of all the complaints about the three broadband providers, the vast majority (93%) are due to a lack of internet access, according to Downdetector, which monitors outages online.

It seems that most of the connectivity shortcomings are in the North East of England, but a significant amount is still reported outside this region.

Downdetector also shows obvious connectivity issues for EE’s fixed internet, with a high volume of complaints in Gateshead, Newcastle and Sunderland, indicating that it could be due to the fire.

EE is owned by BT and its broadband service also operates on the Openreach network.

In the photo, TalkTalk failure reported by users via Downdetector. This shows a large scale problem across the UK 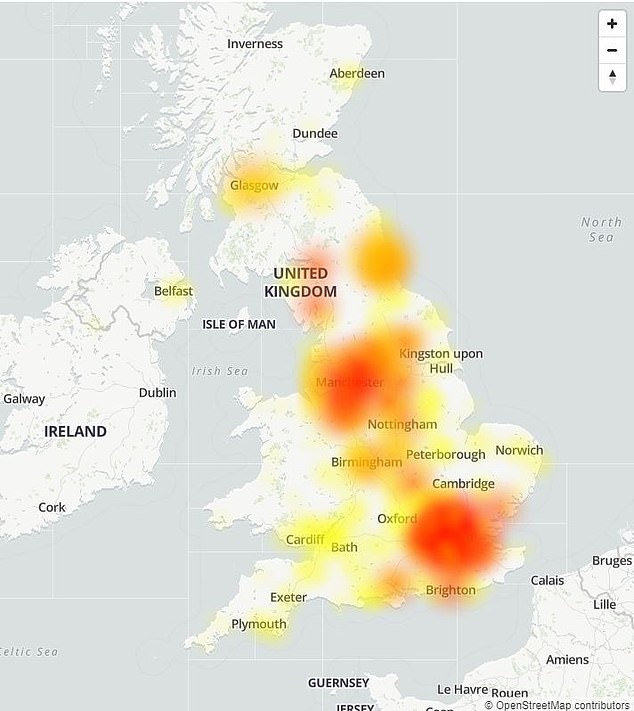 Illustrated live fault map of problems for Plusnet. The spokesperson said the issue was due to a fire which had now been contained and engineers are on hand to resolve the issue 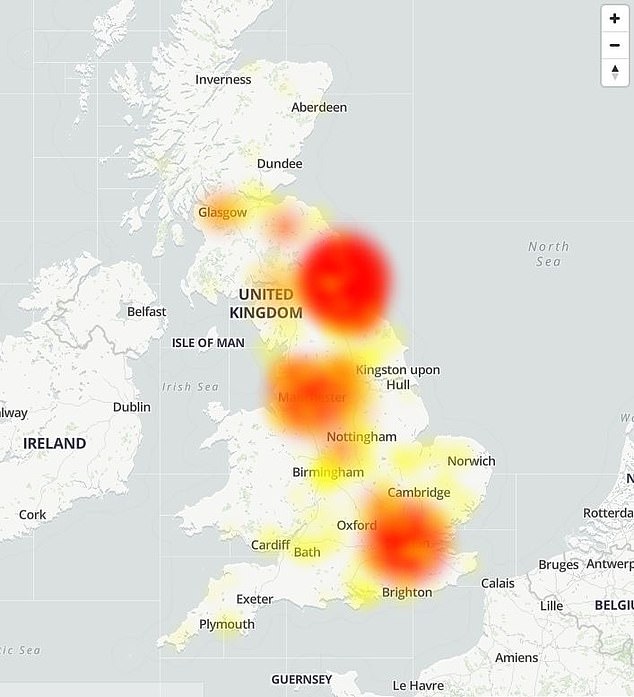 Live photo outage map for BT. It seems that the bulk of the connectivity issues lie in the North East of England, but a high concentration is reported outside this region.

BT’s Status of Service website confirms the provider has been affected by an outage in the Newcastle and Jesmond area.

A BT spokesperson told MailOnline: “We know that some customers are currently having problems when trying to make calls or connect to the internet.

“This is due to a fire in Newcastle, which has now been contained. Our engineers are on site and are working quickly to resolve this issue.

“We apologize to our customers for the inconvenience caused.”

Meanwhile, TalkTalk issued a statement in which: ‘We know that some customers in and around the North East of England are currently experiencing a loss of service due to a fire at a local BT Openreach site in Newcastle , affecting a number of suppliers. .

“We apologize for the inconvenience caused and are working with local engineers to restore service as soon as possible.

Commenting on the outage, Dan Howdle, consumer telecommunications analyst at UK Mobile and Broadband Comparison, said most UK networks had handled the increase in traffic well during the coronavirus lockdown.

“The reported BT and TalkTalk outages are certainly intended to frustrate those still trying to work from home, but historically both networks have been quick to fix issues, so this will likely be a short-term inconvenience rather than a protracted problem, ”he adds. .

“Households will still be able to connect to the Internet using their mobile device as a Wi-Fi hotspot, although those who choose to do so to continue working from home should know that using your mobile in this way will be exhausting. the data. , and any data-intensive activity – such as video streaming – will speed up this process, so you should be aware of your limitations.

Lockdown has seen huge demand for residential broadband with traffic increasing dramatically in the UK.

Internet service provider Openreach recorded the busiest day in history on its network on June 30.

On that day, more than 189 petabytes of data were consumed by customers through Openreach in the UK, breaking the previous record of 184 PB set on June 11.

An overall increase in internet use has been driven by adults working from home and children taking online classes during the coronavirus pandemic.

Openreach says that in a pre-locked world, the average weekly consumption was around 660 petabytes. At the start of June 2020, this figure rose to nearly 1,000 PB.

However, the record breaking days of June 11 and now June 30 were largely due to massive downloads of huge Call of Duty updates.

Lockdown changes: what you can and can’t do starting Monday, March 8

Google Killing cookies in Chrome is not what it seems

Study shows there was no “mass exodus” from California last year

Toronto will move into the “gray” zone on Monday. This is what it means

Coronavirus: 8 million doses of vaccine expected to land in Canada by end of March after Pfizer increases delivery

Huawei President in the UK, Lord Browne, to step down as government decision looms

Matt Damon is seen for the first time since he revealed his daughter, 21,...