Beijing has staked its claim on disputed land near the border with India, writing the word “China” in large letters.

Troops also appear to have drawn a map of China on part of the lake’s shore, which is located near the site of vicious melee clashes between Indian and Chinese troops in May. 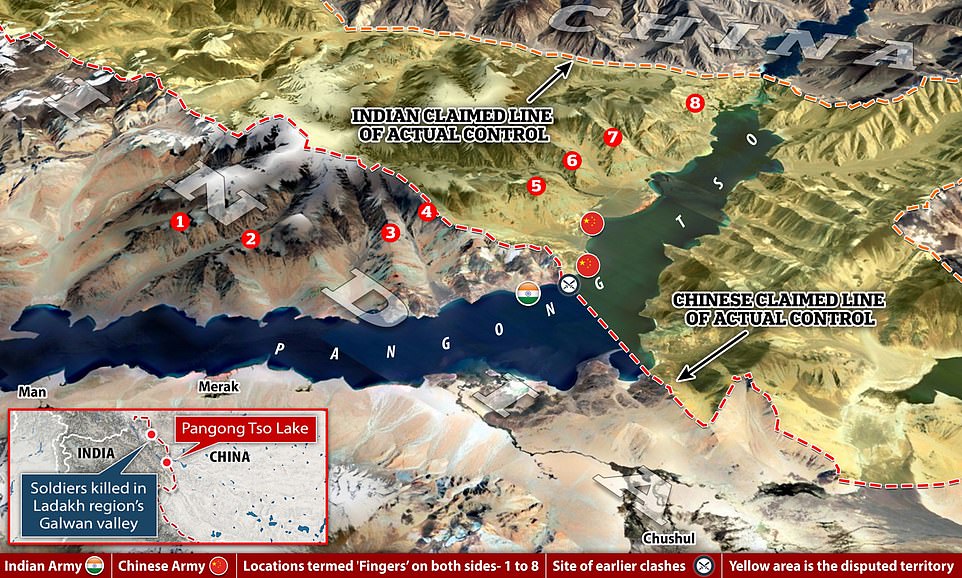 Lake Pangong, located 14,000 feet in the Himalayas, is divided into “fingers” of territory by India and China – marked one to eight on this map. India claims the entire coastline, up to finger eight (border shown at the top). China claims up to “four fingers” (border shown in the center of the map, with the disputed territory in yellow). The Chinese writing appeared near this line, marked by the Chinese flag. Another Chinese base was built higher up the coast, also indicated by a Chinese flag

Lake Pangong is located along the disputed line of actual control which roughly marks the border between the two nuclear powers.

It is 75 miles south of the Galwan Valley, another area where clashes have taken place in recent months and where China has built new bases.

Indian and Chinese forces are dividing the area around Pangong into “fingers” – ridges of land that descend from the top of a nearby mountain to the shore of the lake.

India claims ownership of the entire coastline – from “finger one” at the northwest end of the lake to “finger eight” at the southeast end.

However, China recently staked a claim in the territory from “finger eight” to “finger four” which is located roughly halfway along the shore.

The tip of “finger four” is where troops on both sides should have fought earlier this year after China was accused of obstructing an Indian patrol. 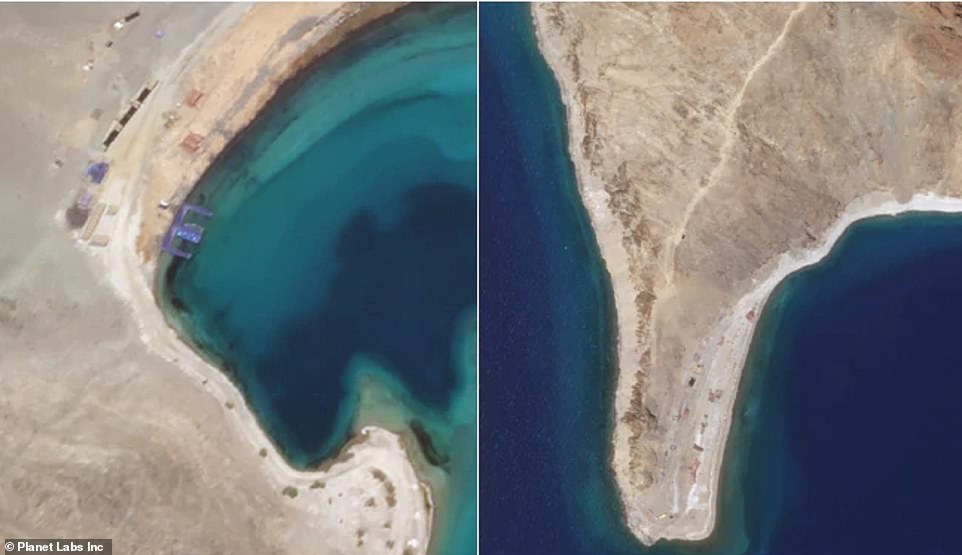 The satellite images also show what appears to be a Chinese-made pier with speedboats parked on it at the base of “finger five” (left) and new construction on the side claimed by the Chinese as “finger four”. , where clashes took place in May (right) 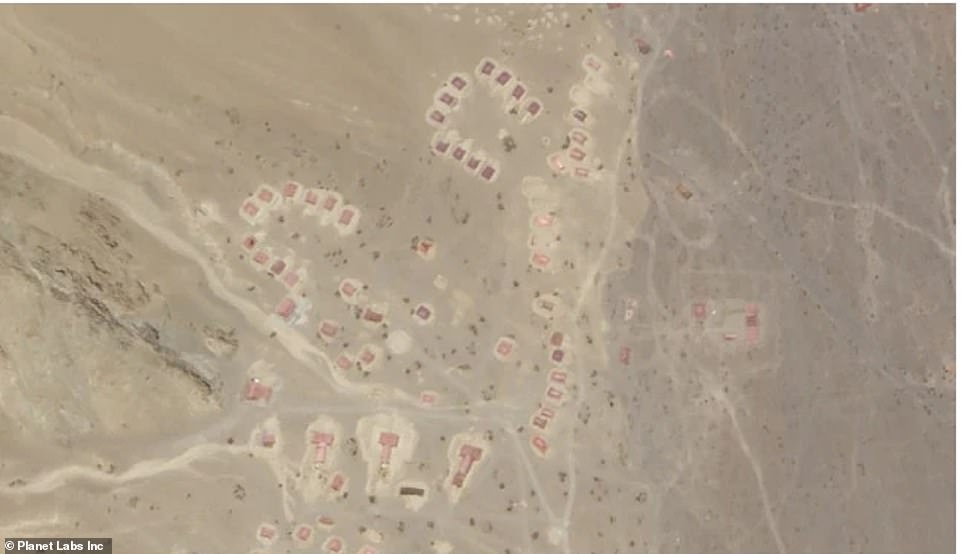 China has built at least 186 huts (some of the huts pictured) in disputed territory, it said, including up to five miles inland, Indian media reported.

India is now accusing China of occupying the disputed territory and refusing to let its troops pass the “four finger”.

The analysis of the images carried out by the Indian station NDTV also reveals an important Chinese construction in the disputed area between fingers four and eight.

At least 186 huts are now visible along the coastline and stretch five miles along a ridge line that extends inland, reports the site.

An important construction also takes place on the tip of the “finger four”, show the images.

A jetty with two fast water craft was also built at the end of “finger five”.

China and India have been involved in a series of border clashes in the past few weeks that each has blamed itself. 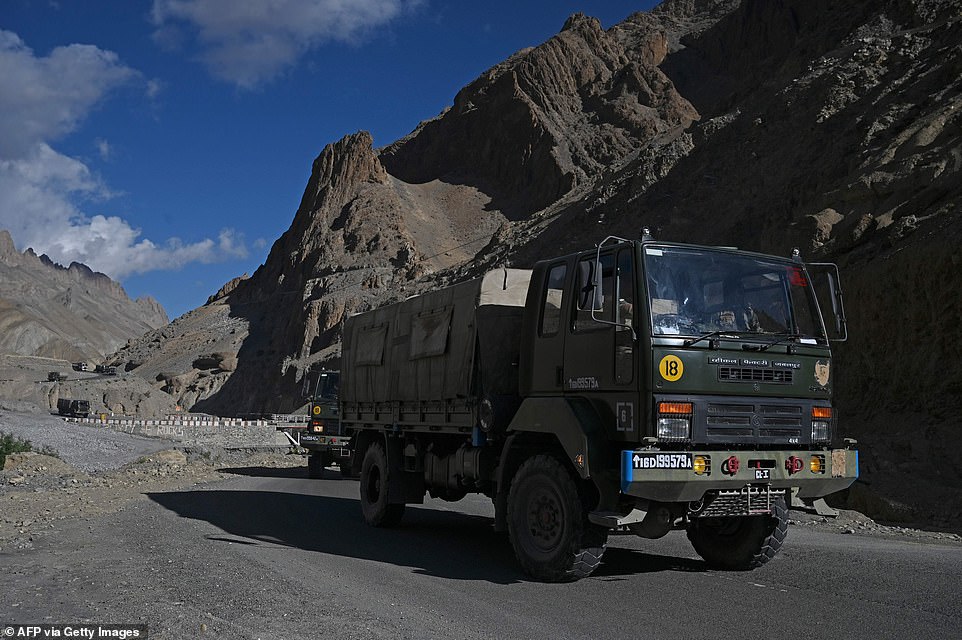 India says it deployed “large numbers” of troops to the region to match the size of Chinese forces, which increased in May (photo, Indian convoy) 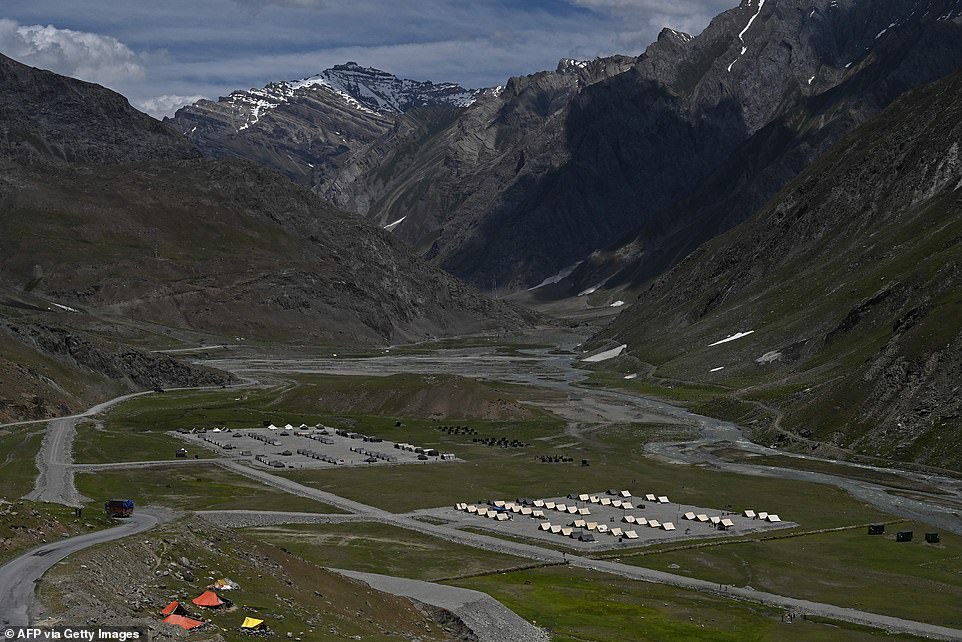 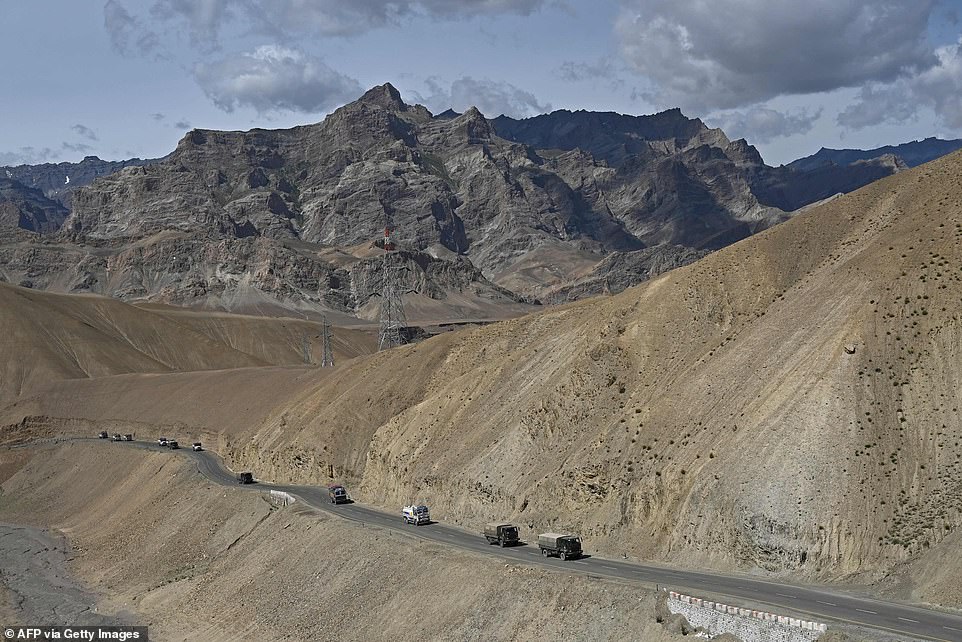 The most serious occurred in the Galwan Valley on June 15, when soldiers armed with sticks and spiked rocks were involved in a vicious fight that left 20 dead and an unknown number of Chinese.

Soldiers fought in close combat as a result of a 1996 agreement banning firearms and explosives from the border region.

Clashes also broke out on the banks of Pangong between May 5 and 6, when dozens of soldiers were again involved in close combat.

Some Indian troops were injured enough to be evacuated by helicopter, but no casualties were reported.

Since the Galwan Valley clash, the two sides have agreed to enter into high-level military talks aimed at “disengaging” in the region.

However, India has admitted that “a large number” of its troops have been dispatched to the region, which it considers necessary to counter a build-up of Chinese military power that began in early May. 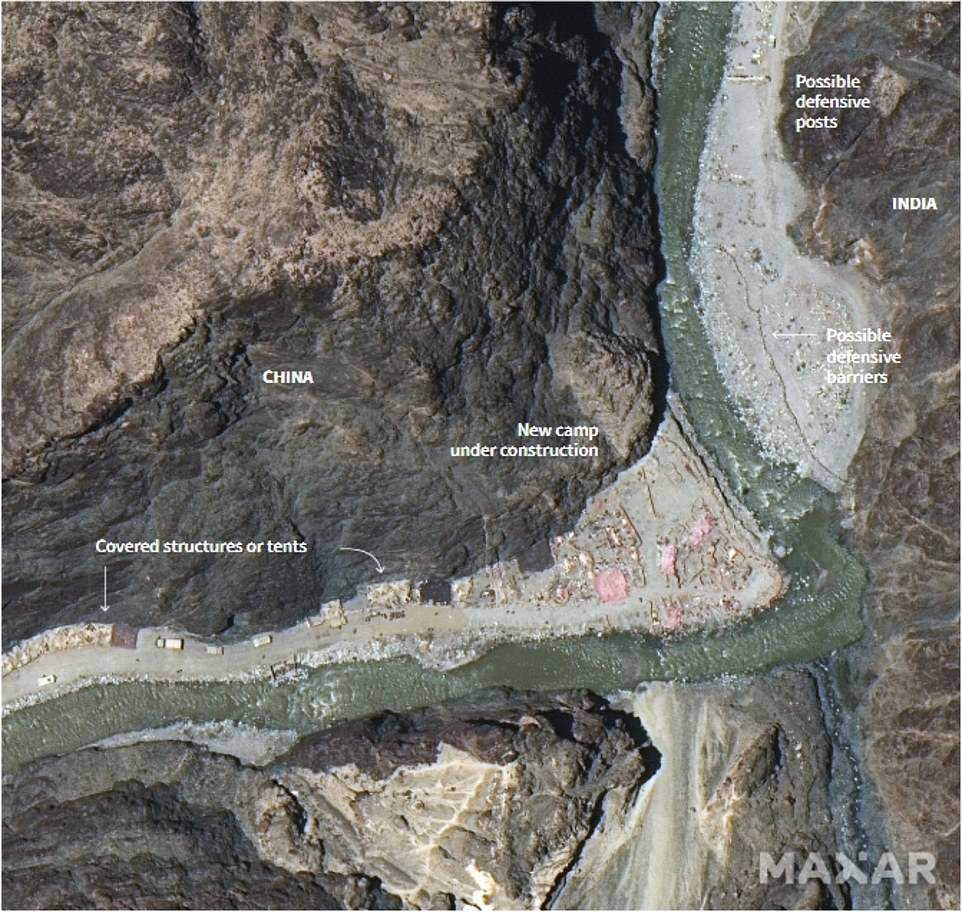 The lake is 75 miles south of the Galwan Valley, where 20 Indian soldiers were killed in clashes with the Chinese earlier this month, and where China is also building new camps (photo)

The Himalayan border between India and China has been disputed for centuries, but the two countries have been arguing for the last time since the 1960s.

In the 18th century, it was fought by the Russian, Chinese and British empires, and after the independence of India, ownership of the region became more confused.

China appreciates the region because it provides a trade route to Pakistan, and the recent hostilities have been sparked by fears in Beijing that India will cut the crucial land corridor.

The current official border between the two has been set by Britain and is known as the McMahon Line. It is recognized by India but not by China.

In reality, the border between the two countries is on the actual line of control (LAC) where Indian and Chinese forces ended after the Sino-Indian War of 1962.

‘We are fighting’: Two former officials of the Afghan Ministry of Women’s Affairs

Two people drowned by abnormally high waves in Peru after the Tonga volcano – .

Stats that tell the story of Biden’s freshman year – .

Prince Edward Island says it will be most of the day before roads fully reopen after storm – .

Prince Andrew accused of ‘blaming the victim’ for tactics in sexual assault trial – .

Half of new poll says frustrated with Biden presidency – .

Ahsoka and Maul is played every two in ‘Star Wars: The...

Rockets’ Harden continues to push for trade despite adding wall

Covid is not over, but Congress begins to prepare for the...

Biden tried to dismiss Putin. The Russian doesn’t have it. –...