Swedish police have named the man who they believe shot Prime Minister Olof Palme in 1986 but closed the case without charge because the suspect was dead.

Stig Engström, a graphic designer, is the man responsible for Palme’s death when he left a movie theater in central Stockholm with his wife on the night of February 28, prosecutors announced on Wednesday.

Engström was known to be one of 20 people at the scene of the shooting and was first treated as a witness by the police, before being considered a potential suspect after changing his story several times.

Popularly known as “Skandia Man”, Engström worked for the financial services company Skandia which had offices near the scene of the murder. 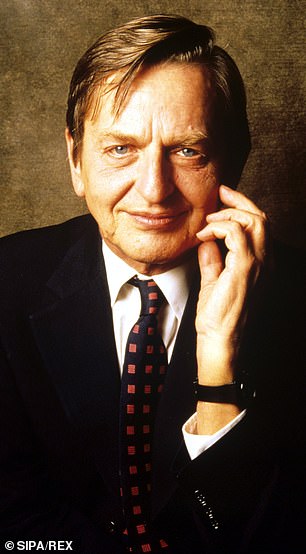 Stig Engström, a popularly known graphic designer as “Skandia Man” (left), was named by investigators as the man who killed Prime Minister Olof Palme (right) in 1986 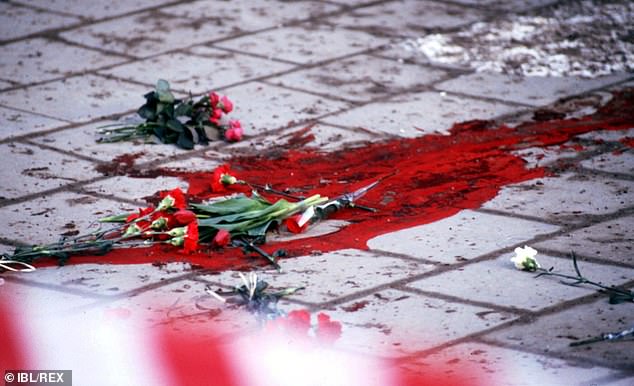 Flowers left on the site the day after the Palme assassination, at a crime scene in Stockholm that was not properly cordoned off at the time

Security guards said they spoke to him as he left the office shortly before the murder, then again when he returned to tell them what had happened.

Engström is believed to have been motivated to kill Palme because he disagreed with the Prime Minister’s leftist views.

Two Swedish writers had previously named Engström as the man most likely to be responsible for the murder.

Engström was named on Wednesday after a thorough review of the case – the largest murder investigation in Swedish history – which began in 2017.

Prosecutors said they started working on the theory that Engström was the man responsible in the fall of this year after examining the evidence.

Investigators say the evidence includes 22,000 reports directly identifying some 90,000 people – as well as 40,000 on the periphery of the investigation.

Some 10,000 people made statements to investigators, including 134 who “admitted” the murder – 29 of them directly told police that they had done so.

Before Wednesday’s announcement, police were believed to be on the verge of revealing that they had found the weapon used to kill Palme – but admitted that they had not.

The bullets that killed Palme were tested against 788 weapons, according to investigators, but none proved successful.

The murder weapon could be among those tested, officers said, but the bullets have so few traces on them that it has been impossible to conclusively prove which pistol fired them. 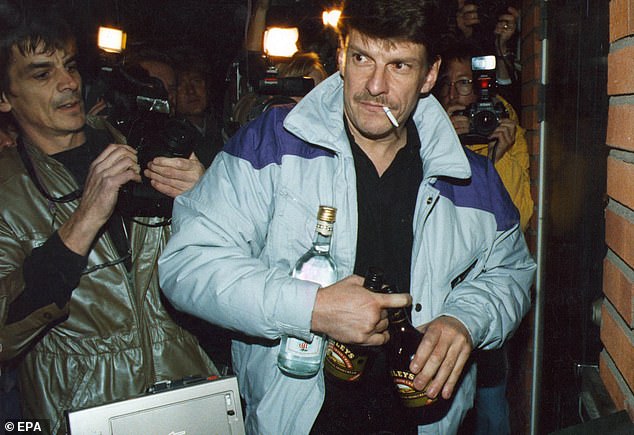 Christer Pettersson Jailed For Palme Murder After Being Chosen By Palme’s Wife, But Released After Rejection Of Evidence

The life and death of Olof Palme

Palme was born to a wealthy family in Stockholm in 1927. He was elected to parliament in 1958, climbing the ranks of the left social democratic party despite his patrician roots.

He became Prime Minister in 1969 and led the expansion of the Swedish welfare state, but higher taxes and stronger unions put him at odds with business and the right.

His condemnation of the American bombing of Hanoi during the Vietnam War strained ties with Washington, and Sweden welcomed American citizens fleeing the project. Palme also called for sanctions against apartheid in South Africa.

After a period without power, he was again Prime Minister from 1982 until his death.

On the night of February 28, 1986, Palme was shot in the back at close range while walking with his wife Lisbeth along a busy street in Stockholm.

Several witnesses saw an assailant in a dark jacket or coat, who fled the scene into a dark alley and climbed a flight of steps toward a road above.

The murder weapon, suspected of a Smith & Wesson .357 magnum revolver or a similar weapon, was not found.

A suspect linked to right-wing groups was arrested 17 days later, but was quickly released.

The lead investigator resigned after no evidence was found during a 1987 raid on a bookstore linked to the Kurdish separatist group PKK, which had recently been named a terrorist organization by the Palme government.

Christer Pettersson, who had previously been convicted of murder, was convicted of the crime in 1989 but released by a higher court amid doubts about the process by which Lisbeth identified him from a list of police.

Since his acquittal, no suspect has been arrested and the case has frustrated four principal investigators.

Swedish police visited South Africa in 1996 after a former police commander claimed that the murder had been led by apartheid security forces seeking to silence the critics.

The perpetrator, Stieg Larsson, was working on a theory related to the security apparatus of South Africa until his death in 2004.

Other theories have touched various groups, ranging from right-wing elements of the Swedish police to Croatian separatists.

Palme was killed on February 28, 1986, after leaving a cinema in Stockholm with his wife Lisbet to return home, after having dismissed his bodyguards for the evening.

An unidentified attacker shot Palme – an apartheid critic – in the back and fled, leaving the 59-year-old man dying in a pool of blood on the sidewalk.

More than 10,000 people have been interviewed over the years, but the authorities currently do not officially suspect anyone.

Chief Prosecutor Krister Petersson, who resumed the investigation in 2017, will announce his decision at 9:30 am local time.

Experts and Swedish media have suggested in recent months that the most likely scenario would be for the case to be closed, as the main suspects speculated in the media in recent years have all died.

Petersson said in February that if the main suspect had died, it would justify closing the case because a deceased person could not be prosecuted.

Over the years, more than 130 people have claimed responsibility for the murder and the files occupy approximately 820 feet of storage space.

Thousands of people have been questioned about the crime, which has become a national obsession, with an army of amateur detective chasing the culprit and rewarding 50 million crowns (£ 4.3 million).

Christer Pettersson – a petty criminal and drug addict who, in a bizarre coincidence, shares an almost identical name with the current chief prosecutor – was convicted of the crime in 1989 after Palme’s widow identified him in a widely criticized party .

But he was released months later by a court of appeal, which rejected his testimony for technical reasons.

The news that their charismatic leader was brutally killed shocked the Swedes, and their open and peaceful society would have “lost its innocence” that day.

Some of the avenues explored over the decades include the Kurdish rebel group in Turkey, the Kurdistan Workers’ Party (PKK), the Swedish army and police, and the South African secret service. Palme was very critical of apartheid.

A social democrat known as a great speaker, Palme was a controversial figure who enraged Washington with his vocal opposition to the United States’ war in Vietnam.

He also supported the communist governments in Cuba and Nicaragua.

At home, he laid the groundwork for modern gender equality in Sweden, but disagreed with the country’s business and military leaders and spoke out against nuclear power.

Some theories suggest that Palme was the victim of a sniper acting out of ideological hatred. 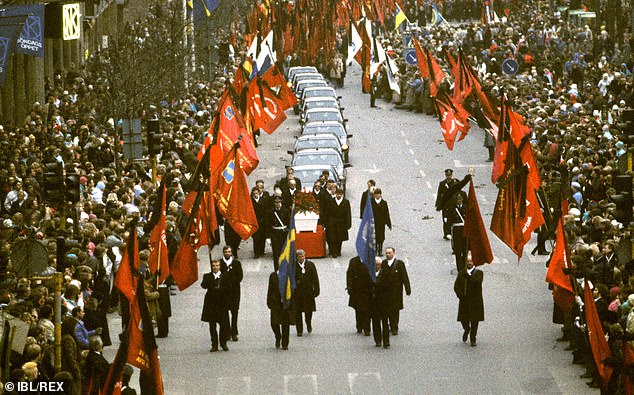 Crowds line the route of the Palme funeral procession in March 1986, two weeks after he was shot dead after leaving a cinema with his wife 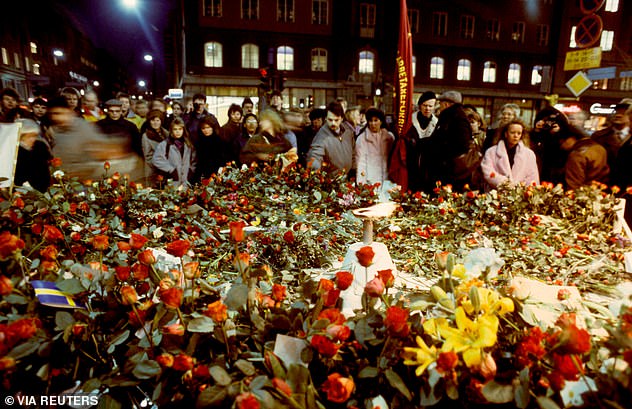 People lay flowers the day after the murder in Stockholm. Petty criminal convicted of murder in 1989, but conviction later quashed

Juventus to win by default after Napoli fail to show up...

“Our Identity Was Stolen”: Life in Kashmir after a Year of...

Trump threatens to permanently freeze funding for US membership review WHO