The British government is set to abandon its 14-day quarantine policy by the end of the month in favor of “air bridges” to low-risk countries, it was announced today.

Travel agency bosses in Britain say they have been assured plans will change in a few weeks, with two court challenges already filed against the ministers.

The Department of Foreign Affairs is also expected to drop its advice against all non-essential travel around the world for the British – and could do so by the end of June.

This is because low-cost airline Ryanair has revealed that flight bookings to Mediterranean destinations have doubled compared to a week ago, The Times reported. 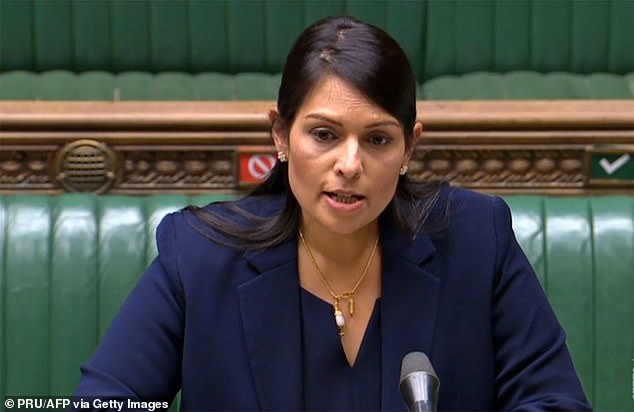 All new arrivals to the UK – including the British – are now required to fill out an online contact search form stating where they will live for a fortnight. Failure to do so risks a fine of £ 1,000.

But Ryanair chief Michael O’Leary called it “worse than useless” when police would take “no immediate action” even if a passenger gave a false address.

British travelers could receive Covid-19 “immunity passports” to travel the world without having to go through quarantine.

Interior Minister Priti Patel told deputies that the idea was being considered at the end of the 14-day isolation period.

Similar documents are already held by those who have received a yellow fever vaccine.

A Whitehall source told The Sun, “Immunity passports are just one of the policies we are considering. “

Scientists are still working to provide a definitive answer as to whether recovering Covid-19 makes you immune to catching it again.

Legal action has already been launched by British Airways, easyJet and Ryanair in a joint action which plans to seek judicial review from the High Court.

A second was also put forward in a pre-action letter from lawyers on behalf of Simon Dolan, owner of charter airline Jota Aviation based in Southend.

His team wrote to Interior Minister Priti Patel and pointed out that even government scientific experts had not supported the quarantine plans.

And a third challenge is now being considered by the new Quash Quarantine group, which represents more than 500 hotels, travel agencies and hotels.

Spokesman Paul Charles, who is also managing director of The PC Agency, told MailOnline: “The Quash Quarantine group, made up of more than 500 travel and hospitality companies seeking to reverse the measures recently introduced quarantine, has received private assurances from leading government sources that traffic lanes will be in place as of June 29.

“We urge the government to urgently report publicly to the travel industry that this is the case, and to change the FCO’s advice on non-essential travel.

“We are still considering our options for legal action, including whether to join BA’s claim or launch our own action, but would prefer June 29 to be confirmed as soon as possible for the start of the travel lanes.

“The industry needs urgent visibility on a travel calendar to start again. “

But the plans do not seem to discourage British travelers, with Ryanair reporting a large increase in bookings among British families. 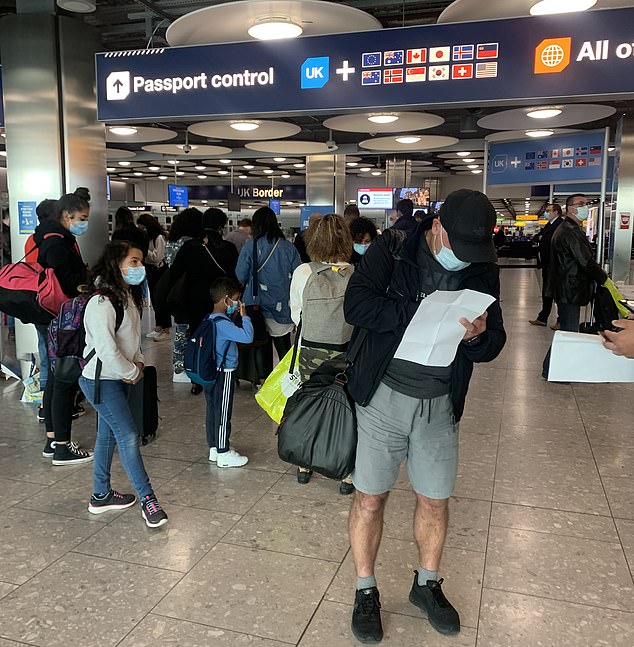 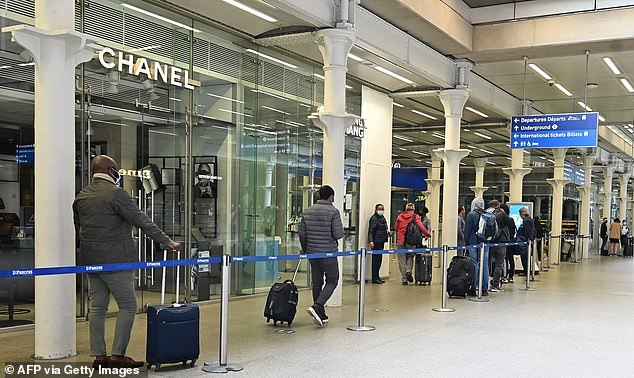 O’Leary said: “Our bookings have doubled this weekend compared to the previous weekend; mainly with British families booking holidays to the Canaries, Algarve, Balearic Islands, Malaga and Italy.

What happens when you arrive in the UK?

All passengers arriving in the UK will need to complete a form before traveling to Britain. This will include returning UK nationals, as well as foreign visitors. You must provide the address where you will be staying in the UK – and isolate yourself there. You will not be allowed to leave this address or receive visitors for 14 days.

How will it be applied?

There will be spot checks to ensure that all passengers have completed a form. Border personnel will interrogate people when they leave planes and at border checkpoints.

What happens if I refuse to fill out a contact search form?

Border forces officers will fine you £ 100 on the spot.

What checks will take place during the 14 day period?

Public health officials will conduct random checks over the phone. If in doubt, the police will go to the address and fine if necessary.

What happens if I leave the address I provide on the form?

In England, you will receive a cash fine of £ 1,000. You could even be prosecuted and subject to an unlimited fine if convicted. The fine could increase beyond £ 1,000 if the “risk of infection from abroad increases,” according to the Home Office. Scotland, Wales and Northern Ireland will have their own application systems.

Will foreign visitors be treated differently?

Can I use public transportation to get from the airport to my isolation address?

Yes, but the Home Office says it would be best if you used your car.

What happens if I don’t have an appropriate address to go for 14 days?

The government will provide seclusion accommodation – perhaps in places similar to that used by travelers returning from China earlier this year. The traveler will have to pay for it.

A border source said yesterday, “It was a complete farce. The vast majority of passengers did not fill out forms in advance.

“Those who completed it receive an online reference number, but immigration officials cannot log in to verify that this form has been completed correctly.

“It was impossible to distance yourself socially in Heathrow’s arrivals halls because so many people were in a rush.

“There have been problems at Heathrow and Calais and Coquelles, where checks at the British borders are taking place for the Channel Tunnel. It’s a mess.’

The program was further undermined last night as the National Council of Chiefs of Police (NPCC) issued guidelines which revealed that light tactile forces will adopt when screening travelers during quarantine.

Even if a false address appears to have been given, the police should take “no further immediate action”, as directed, and the matter is simply referred to the UK Border Force.

If the police go to an address where a person is supposed to isolate themselves and there is no response, the NPCC says that further visits are “suggested” but that they should not again there is “no other immediate police action”. This case should be referred to Public Health England.

And if the police find someone at a different address than the one they indicated on their form, they should only refer the person to the address provided as a last resort. An NPCC spokesperson said that most of the responsibility rests with Public Health England, adding, “The police have a limited role in quarantine regulations.”

In the event that a case is referred by PHE to the police for further action, he added: “We will seek to establish the circumstances and will continue our approach of engaging, explaining, encouraging and, only as a last resort, doing respect ”.

Passengers arriving in Stansted on a flight from Eindhoven to the Netherlands criticized the measures yesterday.

Ali Gurlek, 30, a London software developer who spent the weekend with friends in the Netherlands, criticized the quarantine rule as lacking in “common sense”.

He said he had to take public transportation from the airport to his home where he would be isolated, adding, “If we have it, it will spread that. “

At the Eurostar terminal in St Pancras, Sylvain Preumont, 50, a business owner who travels weekly from Paris, said as a frequent traveler that he was exempt but that he was not a fan of politics.

“It makes no sense,” he said. “It was invented to reassure people … so we realize that it is not possible. “ 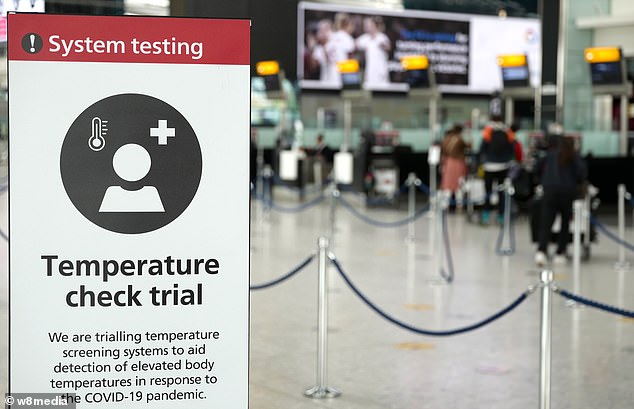 Yesterday, a sign indicating the measures of the “temperature control test” at Heathrow airport “to help detect high body temperatures in response to the Covid-19 pandemic”

Many vacationers are considering stays this year because they consider overseas travel to be “too risky” and want to spill over in 2021, according to a travel agency.

Kuoni reported a “clear recovery” in holiday demand next year, with more than half of its customers heading to the white sandy beaches of the Maldives.

The company also recorded strong sales in Mauritius, Thailand, Spain and India. Saturday was Kuoni’s best day for reservations since the coronavirus lockout started in March.

Kuoni Managing Director Derek Jones said, “Bookings for the Maldives exceed all other destinations we sell worldwide, currently accounting for 56% of bookings for 2021.

“The Maldives has always been our best seller, but it is going even further at the moment.

“Although there is still so much uncertainty around plans to open borders, the 14-day quarantine and social isolation, people tell us that they prefer to plan in advance for the next year and save to make the trip even more special, improving on what they would normally do.

“It is clear from the conversations we have with customers and from the booking schemes that many people will choose to stay closer to home in the UK this year, as they see travel abroad in the near future are too risky. “

“We have had a situation where – weeks ago – other countries have put quarantine in place and we have not done so,” he told LBC Radio. “Now that everyone raises it, we put it on. I would much prefer to see some sort of test regime at the airport. “

A government spokesperson said, “The most effective way to cross the border is to fill out the form before traveling here.

“There are also devices in the ports for passengers to fill out the form on arrival, to make sure that those who don’t know are still able to comply.”

Meanwhile, an Interior Ministry document leaked by the Daily Telegraph reportedly said that there was no method for officials to make sure that a person’s details are “authentic”.

He added, “The police say it is unworkable. The tourism and aviation industry says it will ruin them and the Home Office’s own department said it was very hard to imagine how it would work in practice.

Patel maintained the policy, reiterating that the approach to border measures was consistent and appropriate.

Meanwhile, a travel company said many vacationers are considering stays this year because they consider overseas travel to be “too risky” and want to spill over in 2021.

Kuoni reported a “clear recovery” in holiday demand next year, with more than half of its customers heading to the white sandy beaches of the Maldives.

Saturday was Kuoni’s best day for reservations since the coronavirus lockout started in March.

Campsites in the UK are experiencing a surge in bookings, while Auto Trader recently said that interest in online ads for caravans was up almost a fifth from the same period last year.

See ‘crazy’ scenes as Primark shoppers line up at the Metrocentre store at 9:30 p.m.

The property where Barry and Honey Sherman were murdered sold for $ 4.25 million

Explained: Here are the main takeaways from the Oxford Covid-19 vaccine mistake

Coronavirus: Doug Ford warns medical supplies to Canada are blocked at the US border

COVID-19 in Saskatchewan: 2 deaths and 116 new cases reported on Saturday

Latest news from around the world

The Undertaker accepts “All In Challenge” on IG (video)