President Donald Trump has expressed optimism that a coronavirus vaccine will be in place by the end of 2020.

“We are confident that we will get a vaccine by the end of the year,” he said on Sunday evening.

Trump made the comment to Fox News Channel hosts Bret Baier and Martha MacCallum, who hosted a virtual city hall on Sunday night since the Lincoln Memorial. 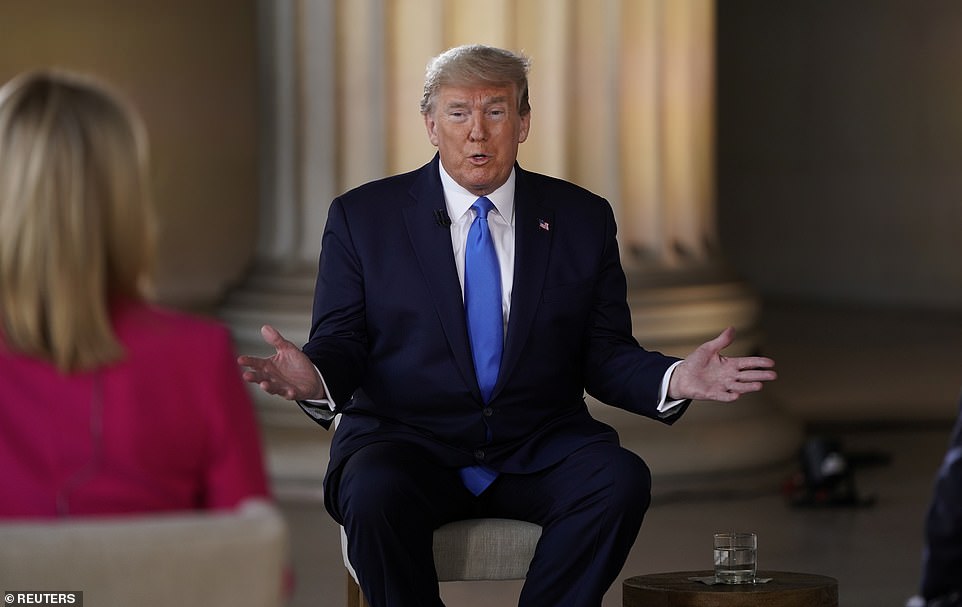 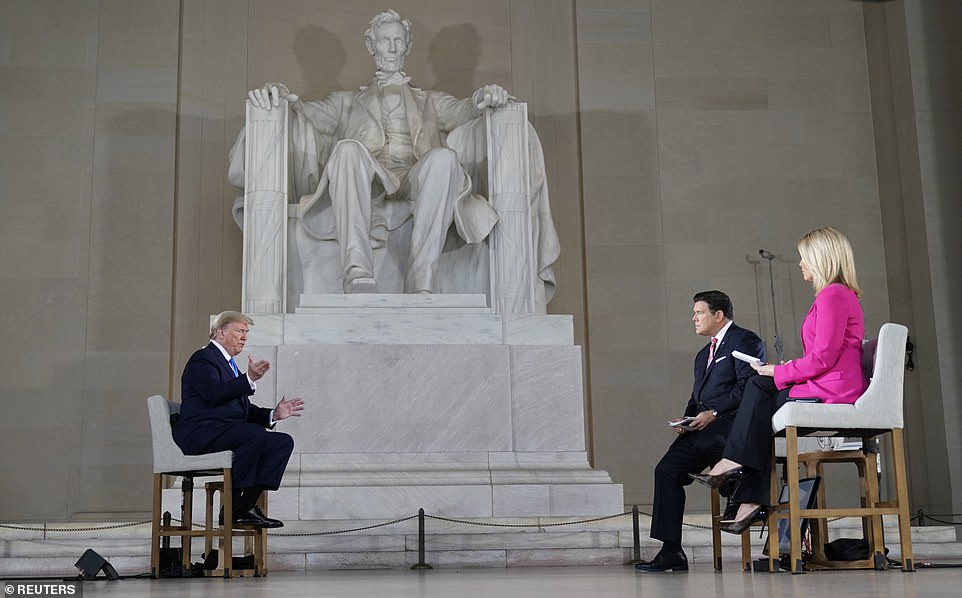 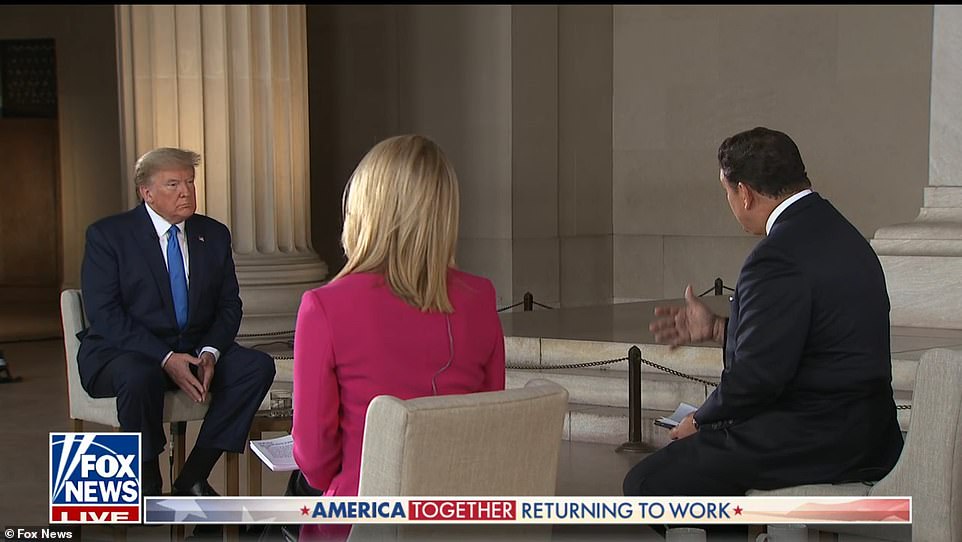 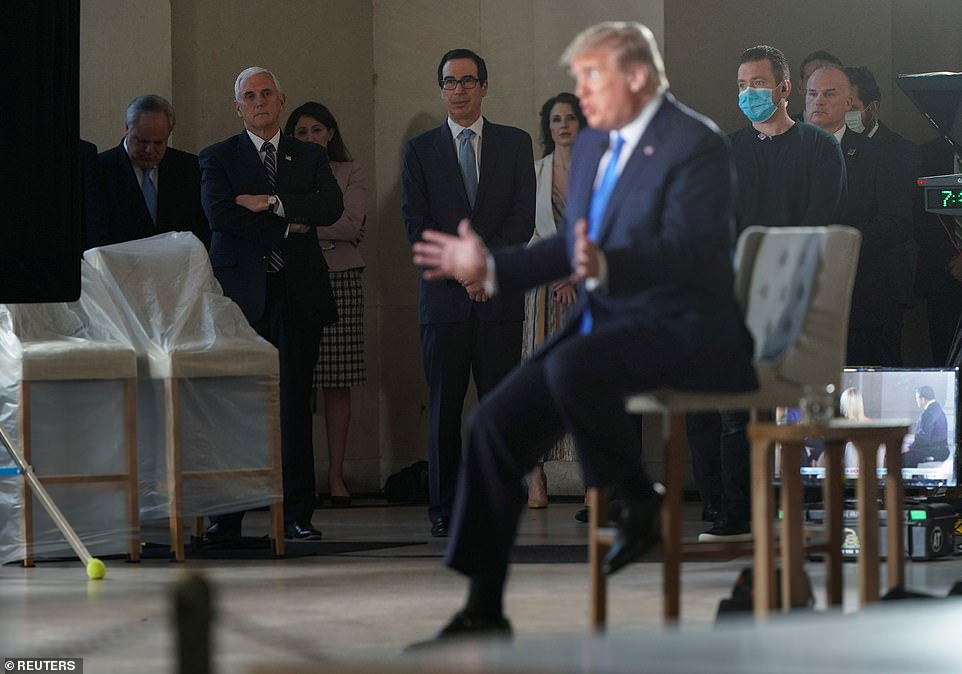 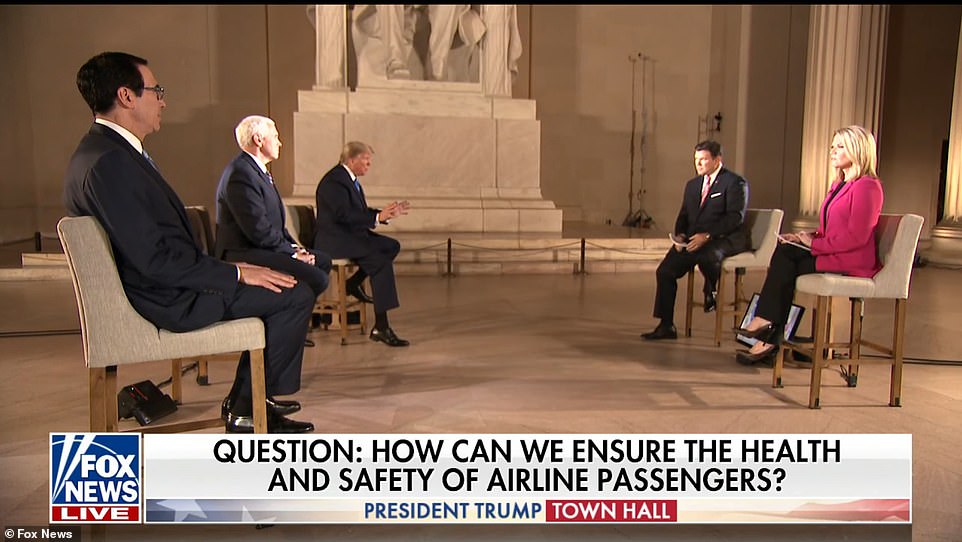 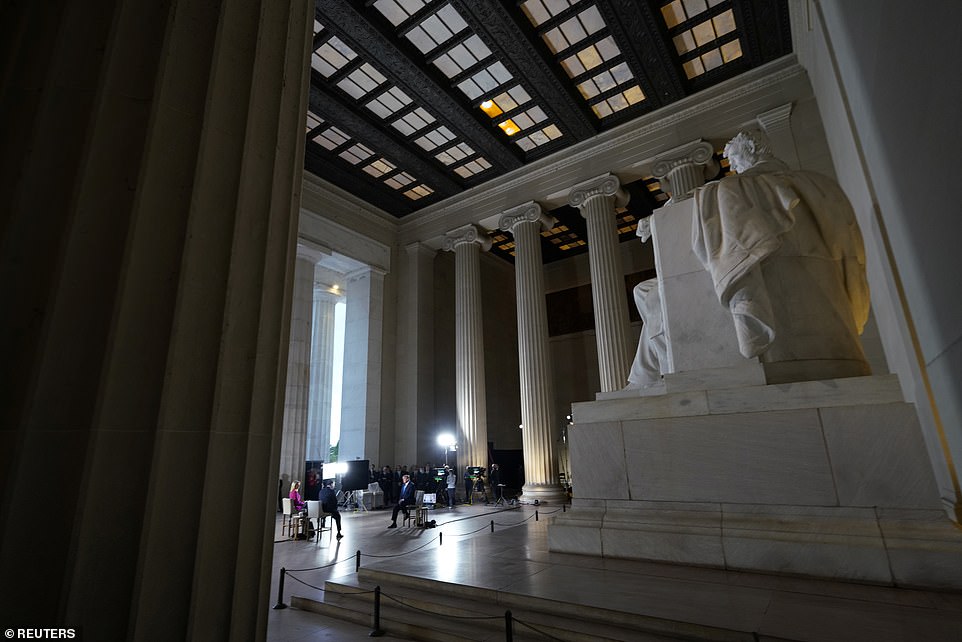 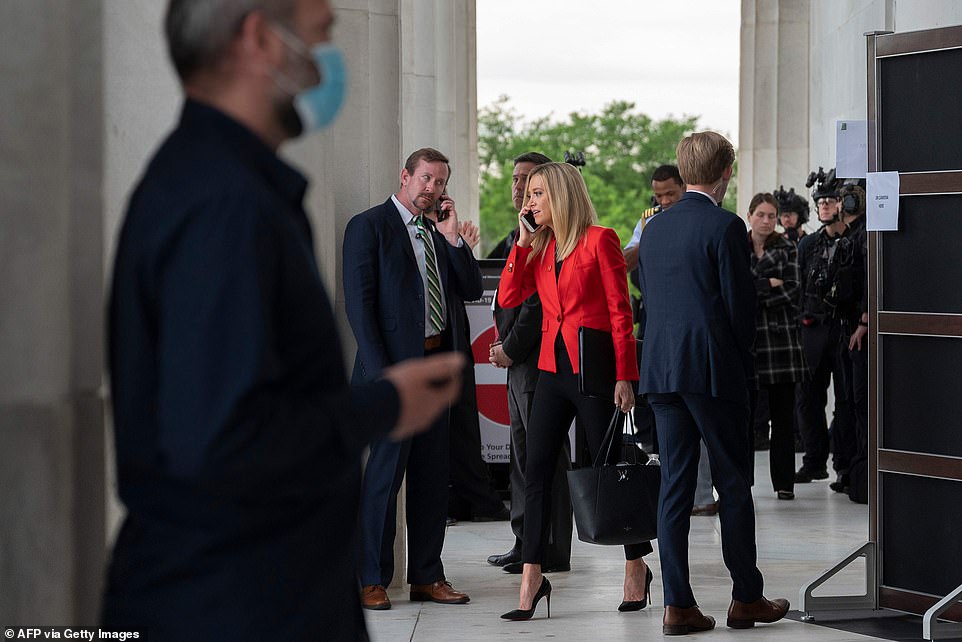 During the two-hour Q&A, where the Americans questioned Trump by video, he was joined by Vice President Mike Pence and Secretary of the Treasury Steven Mnuchin for the last 30 minutes.

Hope Hicks, longtime aide to Trump who recently joined the White House, and new chief of staff Mark Meadows were seen alongside the president during commercial breaks.

Throughout the town hall, he went back on his assertion that the coronavirus vaccine was arriving in 2020.

“We think we will have a vaccine by the end of this year. And we are pushing very hard. We are building supply lines now and we don’t even have the final vaccine, “said Trump.

He highlighted Johnson & Johnson as a company that was making a dent.

“Many businesses, I think, are close,” he told Fox News Channel hosts.

Admitting that it didn’t sound like his usual America First rhetoric, Trump replied, “I don’t care,” when asked how he would feel if another country first developed an effective vaccine.

“I really want to get a vaccine that works,” said the president.

He added that the United States was working alongside Australia and the United Kingdom, and raised Prime Minister Boris Johnson, who became extremely ill due to COVID-19.

“He thought it was over, it was vicious,” said Trump. 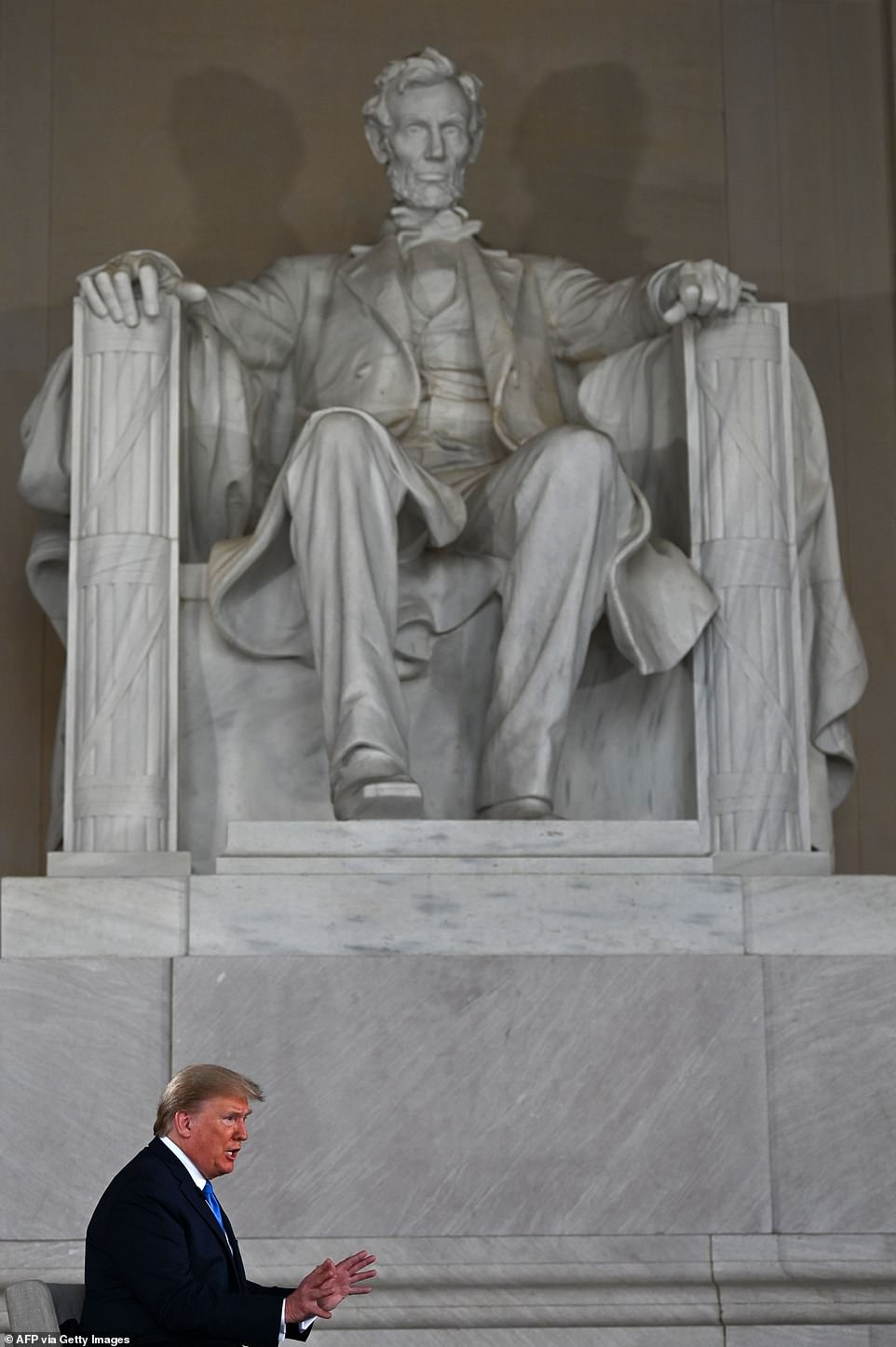 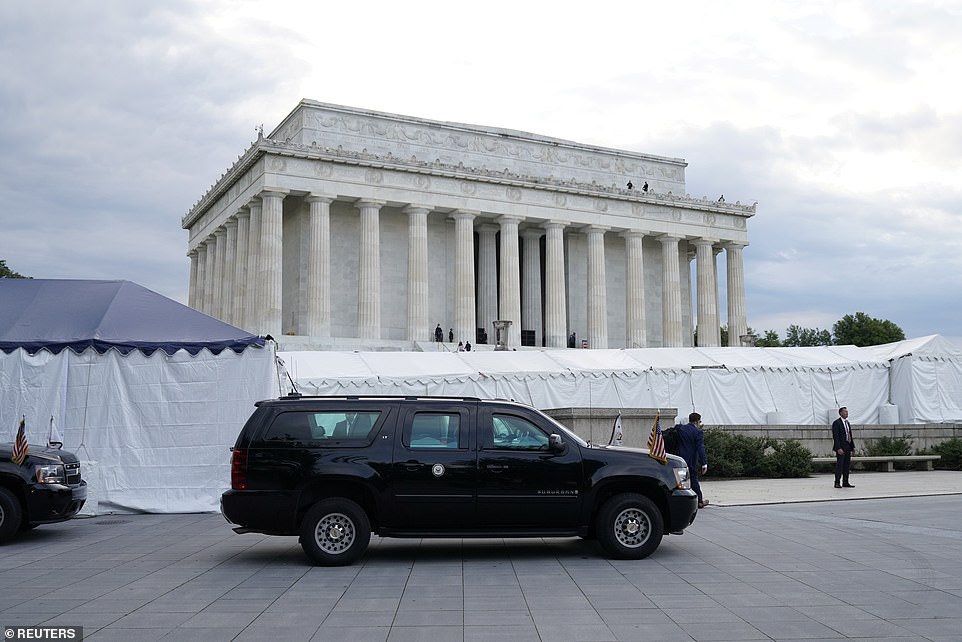 The entrance to the Lincoln Memorial was under tent for the President’s trip to the monument. Part of its procession is seen from the front 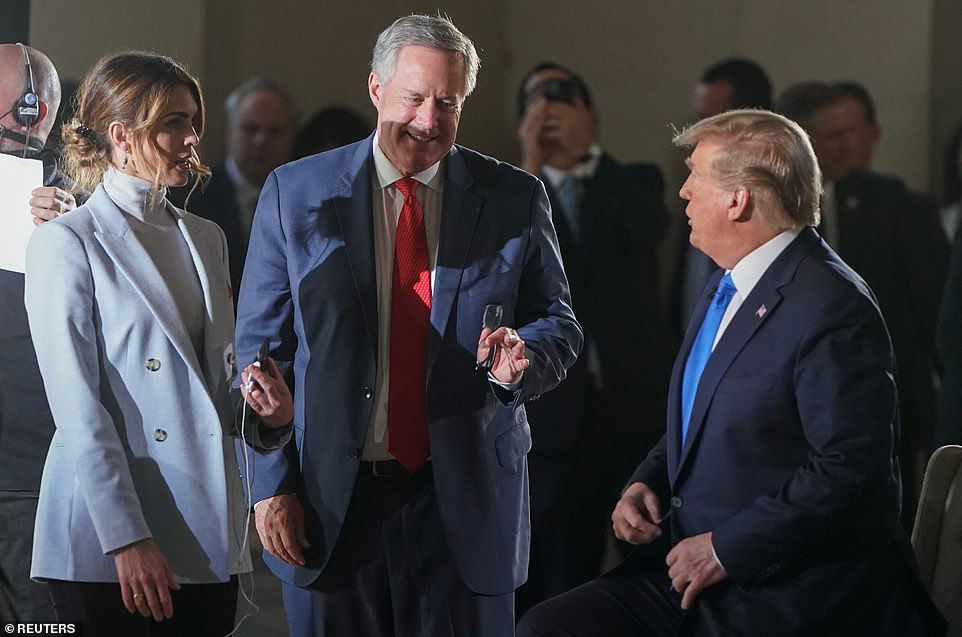 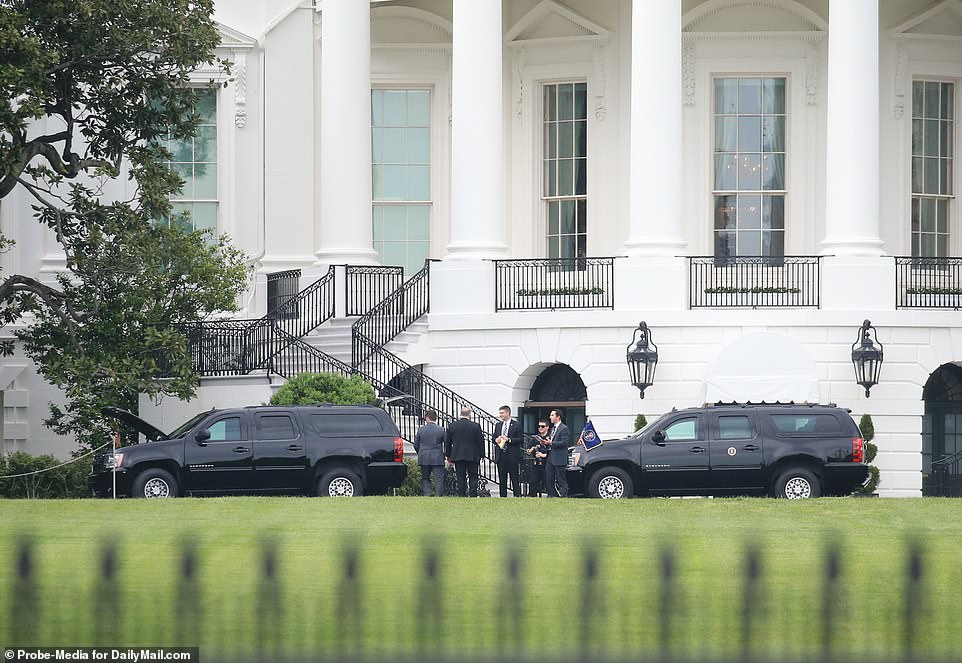 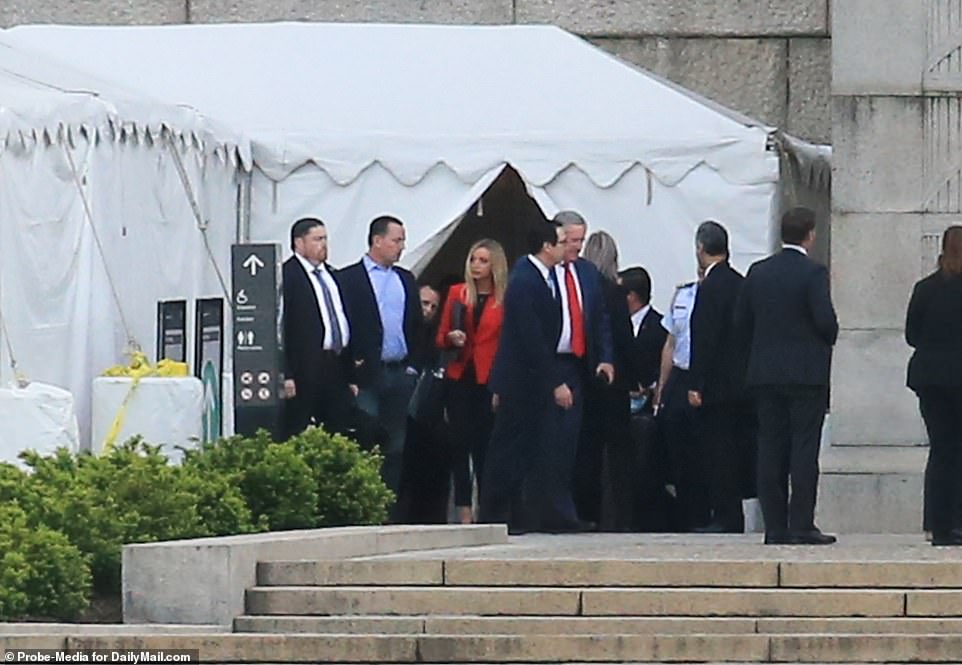 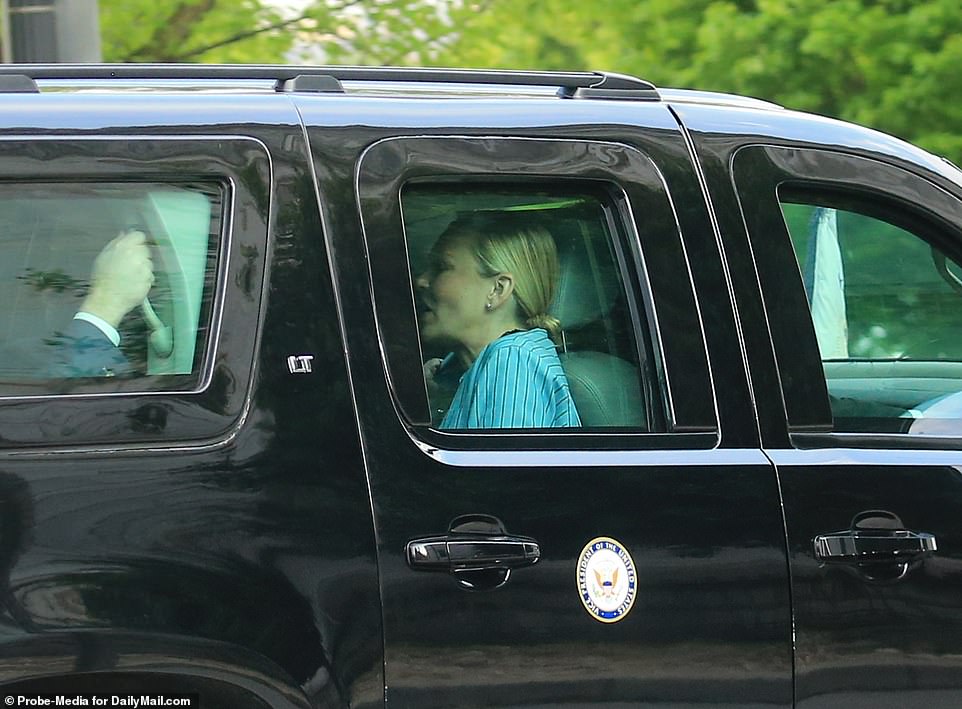 A White House photographer is seen as President Trump’s race departs for the Lincoln Memorial, a short drive from the White House 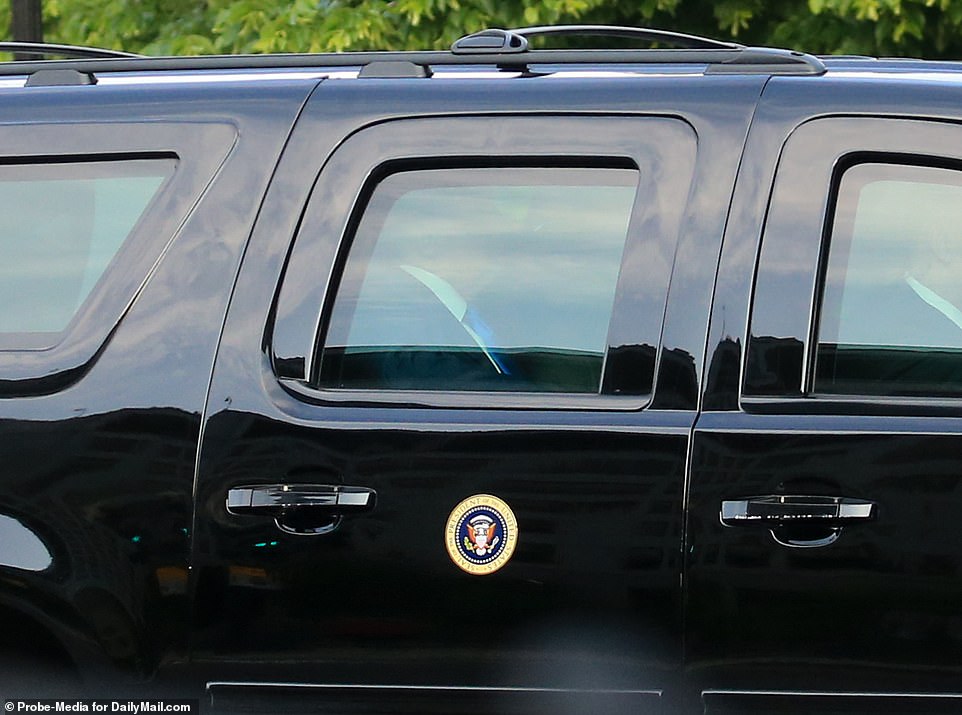 President Trump is seen from his motorcade as he travels between the White House and the Lincoln Memorial in Washington, DC Sunday 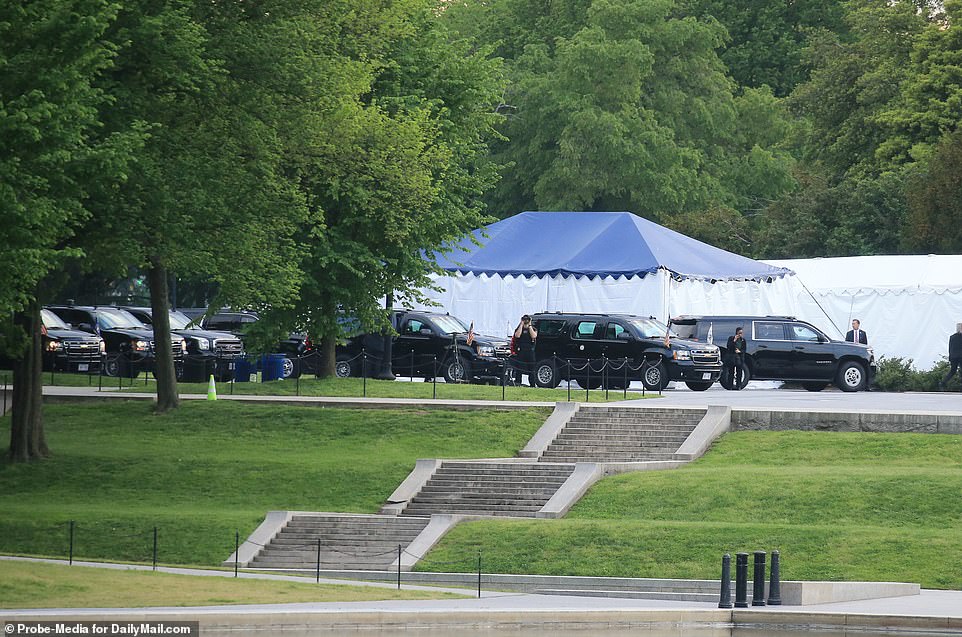 President Trump’s motorcade sits on the side of the Lincoln Memorial on the National Mall in Washington, D.C.

The president said he was not worried about people who volunteered for vaccine trials.

“No, because they are volunteers,” said Trump. “They know what they are getting into,” he added, calling those who sign “good people”.

The president said he would also like to see therapies that could cure patients with COVID-19.

“I would rather have a therapy, something to make people better, not a cure, at least a therapy,” said Trump.

More recently, the Federal Drug Administration has authorized the use of the antiviral drug Remdesivir for COVID-19 cases.

The president also continues to tout hydroxychloroquine, an anti-malaria drug.

He then took advantage of this moment to attack his political opponents.

“This is what we are reduced to in this country,” said Trump. “Democrats, radical left, no matter what you – would rather have people, I will be very nice, I will not say die – would prefer to see people not get better because they think I will credit, if hydroxychloroquine works.

“I have nothing to do with hydroxychloroquine,” the president said, noting how some media reports suggested he was the owner of the company that makes the drug. “Other than that, if it worked, it would be great.” 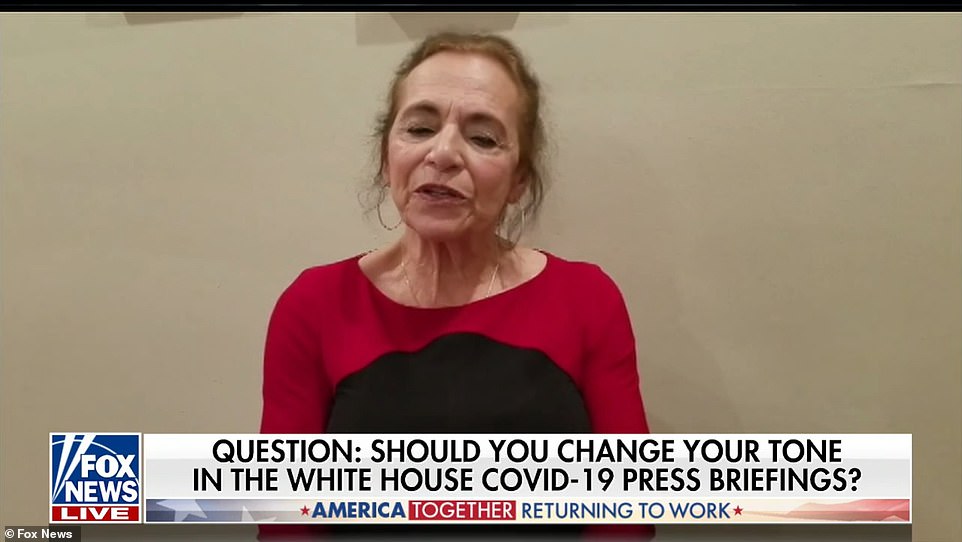 One of President Trump’s supporters asked him about his “manner and presentation”, saying that he would not often answer questions from frontline journalists and that he “would rather talk about past successes and usually walk around “ 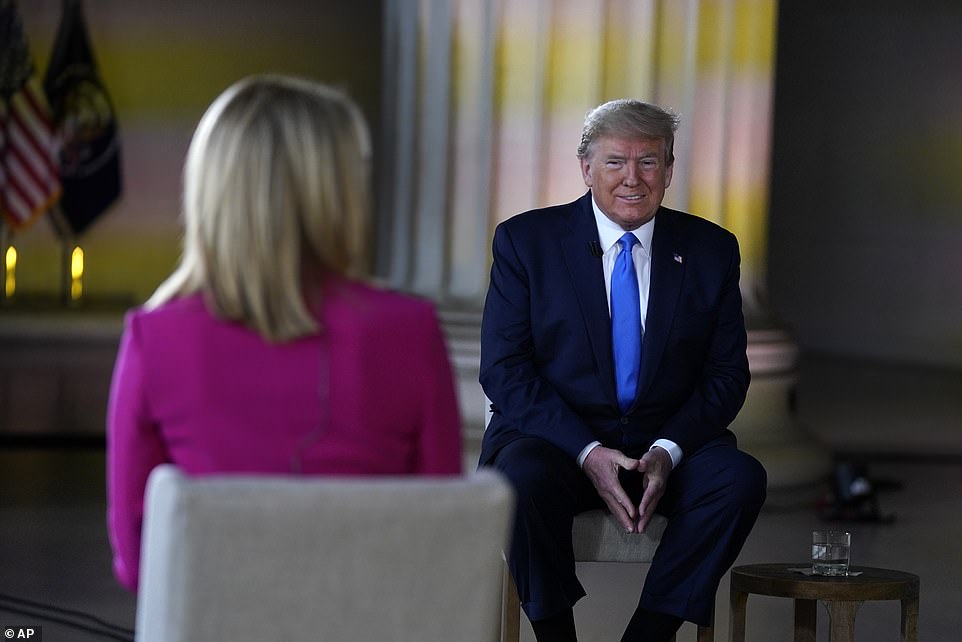 President Trump replied that he had acted the way he did at press briefings because almost 100% of the journalists in the room were “hostile” to him. He then claimed that he had been treated worse than Abraham Lincoln, who was murdered 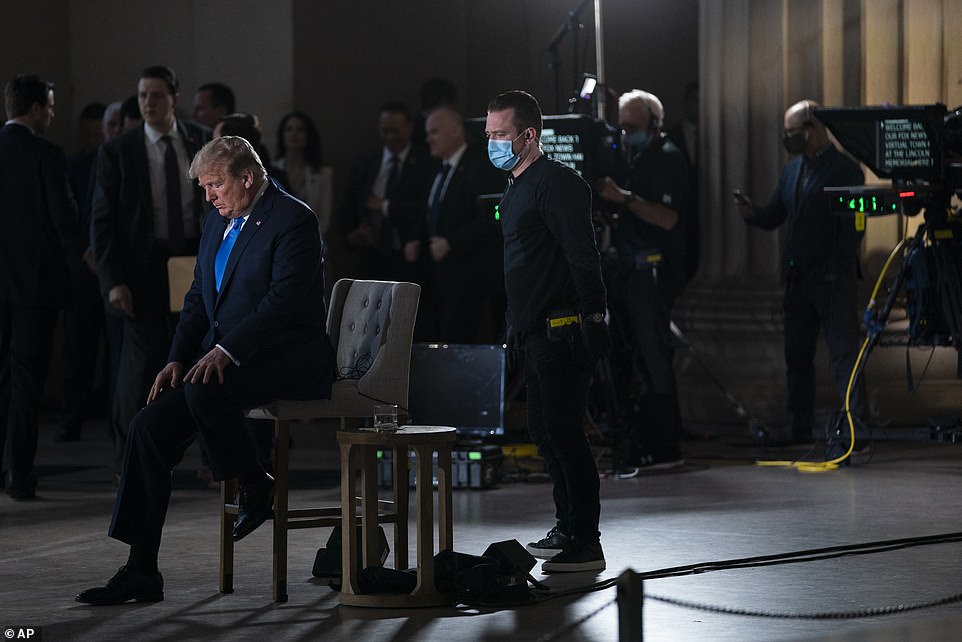 Trump also used his time at the Lincoln Memorial to target the press – and compare the poor leaders’ media coverage of the two leaders, according to the president.

The president was questioned by a supporter, who said that his family prayed for him every day about his “manner and presentation.”

“Why do you use descriptive words that could be classified as bullying and why don’t you directly answer questions from the press and talk more about past successes and generally walks? she asked, asking him to stop.

Trump has said he must act this way because almost 100% of the White House press corps is “hostile.”

“Look, I am greeted by a hostile press like no president has ever seen. The closest would be this gentleman up there, “said the president, pointing to the massive Lincoln statue. “I think I am being treated worse,” he added.

The president called the questions posed by journalists in the briefing room “shameful.”

“And if I were nice to them, I would leave the stage,” he said.

Trump said boaters in Florida came out earlier on Sunday with all kinds of Trump signs.

“We have tremendous support, but the media could just as easily be part of the Democratic Party,” said the president.

The president has once again shown his support for the demonstrators who have come to state capitals, a number of them sporting Trump equipment.

“And these are significant demonstrations,” Trump told the Fox News Channel hosts.

And at the top of the program, he explained how “everyone is probably scared”.

He said he had known people who had contracted the flu all his life.

“I was lucky never to have had the flu, then I came here, and they wanted to give me a flu shot, I said,” I don’t want to get vaccinated with fire ” , but they have to give it, “he said, apparently from a discussion he had with the White House doctor after he became president.

“I have known people who have had the flu my whole life, no one has ever died,” said Trump.

While making comparisons between the two viruses in the past, Trump did nothing like that on Sunday evening.

“I lost three friends,” said the president. “A very good friend, a very successful man, a guy from New York, employed a lot of people – they were all crying about his death, Staney Chera. “

Chera died of complications from COVID-19 at the age of 78 in mid-April.

He was a real estate investor in New York.

“He went to the hospital, he called me, he said,” I tested positive, I said what are you going to do? ” I’m going to the hospital. “I will call you tomorrow,” said Trump, recalling their conversation.

“I’m calling the hospital, he’s in a coma,” said Trump. “I know a lot of people who have had the flu, they have never been in a coma. “

Trump called it a “horrible thing” that the country is fighting.

For some businesses in Mass., the COVID-19 pandemic has pushed changes for the better – .

Here’s the latest on the coronavirus in British Columbia – .

BC gym owners are waiting to see if COVID rules will be lifted or stay – .

Horror of the Queen: How royal’s ‘dry spirit’ helped the royal family out of...