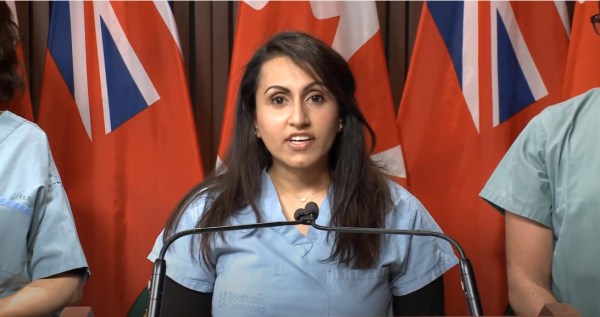 Greater Toronto Area Front-Line Doctor Warns Public That Canada’s New Agreement With China To Develop COVID-19 Vaccine Is “Counterproductive” And “Dangerous” Because Of The Long Secret History Of Chinese government.

Recently, the National Research Council of Canada (NRC) ad they are working with a Chinese company CanSino Biologics to develop a vaccine called Ad5-nCoV, which is being developed in conjunction with the People’s Liberation Army. CanSino has already started its second phase of human clinical trials, although the first phase is not completed before December. Yet Health Canada has approved the first human clinical trials to take place at the Canadian Center for Vaccinology at Dalhousie University.

Dr. Kulvinder Gill, who is also president of Relevant Ontario Physicians, a nonprofit organization that advocates for health issues affecting physicians and frontline patients, said it is alarming that the second phase had already started when CanSino non published all data from its first phase for public review.

“The normal development cycle for a vaccine is 10 to 15 years,” said Gill. “The shortest vaccine development cycle ever recorded is for the vaccine four years. This human clinical trial with the Chinese Communist Party vaccine is taking place at an alarming and dangerous rate without respect for research ethics and transparency. “

Gill added that it is also alarming that Health Canada could use the vaccine before the end of the study “Emergency release”. There are already discussions about what these steps will entail.

“Even the Center for Disease Control and Prevention in the United States warned last week “there is the possibility of negative consequences where some vaccines could actually reinforce the negative effects of the infection,” said Gill. “And the biggest unknown is the effectiveness […] We must not lose sight of the fact that coronaviruses are a large family of RNA virus, which include colds. There is no approved vaccine for human coronavirus. “

Gill pointed out that two other coronavirus outbreaks, SARS and MERS, have dissipated naturally without any vaccine intervention, and that the research for the coronavirus we face, called SARS-CoV-2, was “reassuring”.

“There are no confirmed cases of reinfection or reactivation, strong T-cell responses augur well for long-term immunity, and there is residual immunity to common cold coronaviruses that offer some cross-protection against COVID -19. There is also strong evidence that tests limited to Canada capture less than 10 percent of actual cases, “said Gill, adding that SARS-CoV-2 could burn naturally like SARS and MERS.

In addition to the unusual steps by the NRC and CanSino to rapidly develop a vaccine, Gill pointed out that there are many other reasons why the deal is questionable, some dating back several years before the epidemic.

“The Five Eyes Intelligence Alliance, comprising Canada, the United States, the United Kingdom, Australia and New Zealand, has raised significant concerns about China’s management of the new coronavirus, “Attack on international transparency” with the disappearance of Chinese scientists and whistleblowers, the censorship of scientific data and the fatal refusal of human-to-human transmission through the World Health Organization, “said Gill.

In 2014, NRC’s computer systems were pirate by a “very sophisticated Chinese actor sponsored by the state” and cost the federal government hundreds of millions of dollars. This same year, NRC has signed a non-exclusive license allowing CanSino to use HEK293 cell line free of charge.

In 2018, China faced “The worst public health crisis in years” after discovering that one of its main drug producers standards violated for making at least 250,000 doses of diphtheria, tetanus and pertussis vaccine. As a result, hundreds of thousands of children may have been affected. The scandal would have has shaken the confidence of Chinese citizens in the quality and safety of their country’s vaccines.

“The role of our governments is to build trust through transparency and accountability,” said Gill. “If the Trudeau government wants Canadians to trust and buy a SARS-CoV-2 vaccine, a partnership with the Chinese Communist Party army is […] the most counterproductive and dangerous thing it can do. [It] must abandon this illogical and dangerous attempt and fund vaccine trials with our allied countries who understand the crucial importance of trust, ethics, security, transparency and collaboration. “

‘We thought he beat him’: Calgary Transit driver who died after COVID-19 battle recalls – Calgary

Boeing wants to calm your fears about air travel in a...

Woman Dives To Death Due To Large Ladle | World

Love Island’s Shaughna Phillips CONFIRMS she had lipo on her legs...

British tourist “drunk” coughed and told him he had a coronavirus...