Seaweed blossoms that cover parts of Antarctica’s snow cover in summer are likely to expand as the planet warms, researchers in a new study say.

A research team from the University of Cambridge and the British Antarctic Survey used satellite data and field observations to develop the first large-scale map of green algae on the coast of the Antarctic Peninsula.

Snow green algae are found in warmer regions along the coast where summer temperatures are above freezing, but still cold enough for snow, scientists in a study say published Wednesday in the journal Nature. It is also more abundant in areas near nesting sites and gathering places for animals such as penguins and seals, whose excrement feeds the growth of algae.

Green algae is not new to Antarctica – it has been known for some time for decades, notes the New Scientist. But what the researchers discovered suggests that climate change could have a major impact on algae in Antarctica, which, in turn, could have its own impact on a warming planet.

Scientists do not predict that green algae will spread to all parts of the peninsula. In fact, some small, low-lying islands are at risk of losing algae, as these islands can completely lose their summer snow cover – and snow algae cannot grow without snow. But they predict that the amount of green algae is likely to grow on larger patches of land, where it can spread upward on higher ground that still contains snow.

“As Antarctica heats up, we anticipate that the global mass of snow algae will increase, as the spread to higher soils will significantly compensate for the loss of small islands of algae,” said Andrew Gray. , researcher at the University of Cambridge, in a press release.

So what does more seaweed mean in addition to making the landscape green? It is not entirely clear. Green algae works like a carbon sink – the current amount of algae in Antarctica takes about 500 tonnes of carbon from the atmosphere each year. On the other hand, algae also darkens the snow surface, which reduces the reflection of sunlight on the snow surface, notes Scientific American. This means that more of the sun’s heat is absorbed, which accelerates warming.

In addition, Antarctica also has other algae – large blooms of red and orange algae, which scientists plan to research and map in future studies. 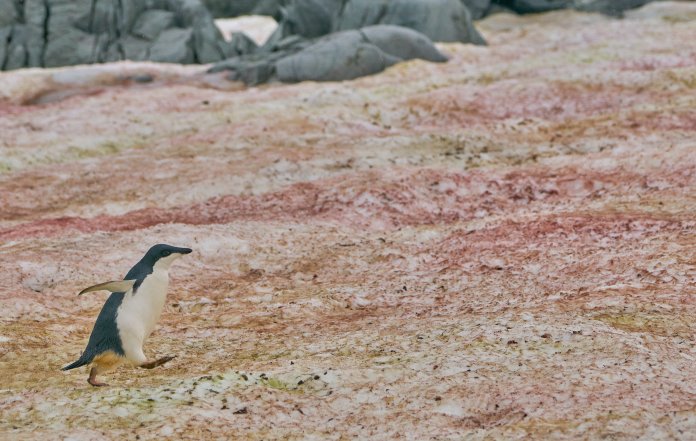 An Adelie penguin surrounded by red algae on the Antarctic Peninsula

Cambridge University researcher Matt Davey said in a video about the study that the overall goal of their work was a better understanding of the “complex connections” between different life forms in Antarctica.

“The more we understand, the more we can protect our planet and its fragile ecosystems that could be lost or changed forever,” he said.

“A remarkable phenomenon”: billions of cicadas are expected to emerge in the eastern United States | Insects

Sofia Richie wasn’t ready to be a stepmom to Scott Disick’s...

It’s probably safe for everyone not to imitate Elon Musk

Meghan Markle sounded “less sober” and “like herself” in George Floyd’s...

Dele Alli is LEFT of Tottenham squad as he faces the...