The passengers have left, but the crews remain.

Thousands of guests have endured the failure of cruise ships riddled with outbreaks of coronavirus. Even virus-free vessels have been avoided by normally hosting ports of call around the world.

Now, these same ships float at anchor or languish on the quays, their cruise schedules are canceled while the pandemic is unfolding around the world. The only people on board are the crew. Like the passengers, they have suffered from the spread of the virus to some of the ocean giants. And they had other problems. Some are no longer paid, but are not allowed to leave the ships.

Without the nonstop party atmosphere, life aboard what is billed as floating pleasure palaces has become routine for those who once cooked, served or entertained.

The pleasure is gone, replaced by a mixture of boredom and worry.

“At this point, I’m ready to go home,” said Wesley James, a music director aboard the Norwegian Sun of Norwegian Cruise Lines, in an interview with the ship to which he was transferred when the guests left, the Norwegian Epic, where he had stayed since March 21. “We follow the same routine day after day. “

He is hardly alone. The number of remaining crew members is staggering.

And that doesn’t count the thousands of others aboard ships frequented by Americans scattered throughout the Caribbean and the oceans around the world.

The Coast Guard added, “The cruise industry has a continuing obligation to care, safety and well-being of its sailors. “

But it is an obligation that is becoming increasingly difficult to fulfill. The Coast Guard issued an order on March 31 ordering ships to leave Florida, Georgia and South Carolina with more than 50 on board to build medical capacity to treat anyone with flu symptoms on their own . He said hospitals near Port Miami would no longer accept medical evacuations from them.

To complicate matters for cruise lines, the Centers for Disease Control and Prevention recommended over the weekend that anyone trying to get home from cruise ships, whether sick or not, should fly chartered or private, not commercial flights, in an attempt to prevent the spread of the coronavirus. This means that cruise lines, rather than simply handing over a plane ticket to a departing crew member, must now line up an aircraft.

Princess Cruises said Wednesday that it is working on a “crew repatriation plan” for its entire fleet, but until it is done, everyone will stay on board.

Carnival Cruise Lines, which now has 27 ships idling with only one crew on board, says it is doing its best to join them. Non-essential staff are returned to their hometown “in most cases by charter flights,” said spokesman Vance Gulliksen. Everyone has their temperature taken daily and when they leave the ship.

This is because the coronavirus has wreaked havoc on crew members, not just passengers.

The deaths of four elderly passengers aboard Holland America’s Zaandam have drawn worldwide attention and caused the three deaths associated with the Princess Cruises’ Coral Princess. The death of a crew member aboard Celebrity Cruises’ Celebrity Infinity cruise ship has been less noted. And two crew members were flown off the Royal Caribbean Oasis of the Seas.

The CDC lists 21 vessels in which travelers have tested positive for the coronavirus on board or after their cruises.

Madeline Truscott, a worried mother of a crew member aboard a Carnival ship in the Gulf of Mexico, said she is looking forward to his return. She refused to give her name to prevent reprisals and requested that the ship on board not be disclosed.

She said he was confined to his cabin. She said she does not know the official reason, but assumes that this may be the case so that the master can further argue for his entry into port. Even if a fellow flight attendant were to show symptoms of the flu, it could be shown that isolation would have prevented it from spreading to someone else.

“I think they are protecting him. I really do, ”said Truscott.

Although he was safe, he was no longer paid as he considered a non-essential crew member now that no passenger on board, she said.

Gulliksen of Carnival said that some of the crew members have gone to “guest status without work” while the cruise line tries to figure out how to get them home. They leave their job with 30 days of salary or are compensated until the end of their contract, whichever comes first. Then, continuing to stay on the payroll, they get “free accommodation, meals, medical care and Internet service to stay in touch with family and friends.”

While cruise lines are strapped for cash – fuel-consuming ships, expensive crews and no paying passengers – other lines are taking a similar stance.

Wesley James, the music director whose aboard the Norwegian Sun abruptly ended with the closure, said he had received two weeks’ severance and was at sea without any additional pay. He expected a free plane ticket to return home – usually standard procedure in the cruise industry – but it was not accepted, and then the trip became complicated and he couldn’t leave. “They managed to bring 50 Filipino crew members home, but we were unlucky,” he said in an email.

Transferred to another ship, the Norwegian Epic, the assembled crews traveled to Nassau, Bahamas, where the sailors – around 1,500 in total – were seated strapped to a jetty, which is not authorized by the authorities. There have been no reports of sick crew members with flu symptoms on either ship, he said.

It is not a pleasure cruise. James said that the Sun’s crew had been given cabins with roommates, but were later assigned private cabins in the name of social distancing. He spent time directing group rehearsals, although much of the ship became banned. The gym, which was available from the start, has closed. Access to the main pool was also closed.

Norwegian Cruise Lines did not respond to requests for comment.

James said the cruise without a stray passengeris finally coming to an end. James said on the phone on Tuesday that the ship was approaching Miami where he expected to disembark and be able to take a charter flight to Seattle.

“We are super happy,” he said.

More:If you have been on these cruise ships, you may have been exposed to the coronavirus

More:Centuries-old laws could protect the cruise industry from huge disbursements in coronavirus combinations 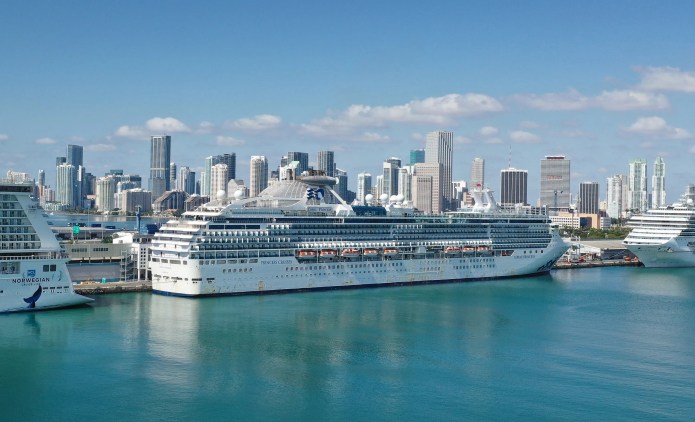