SpaceX plans to launch its seventh cluster of Starlink satellites from Florida at 3:37 p.m. EDT Wednesday amid restrictions during the coronavirus pandemic.

The Falcon 9 rocket is ready to take off from Launch Complex 39A at the Kennedy Space Center. The scheduled launch has a one-hour period for same-day delays, according to the US Space Force weather forecast window.

The weather should be 90% favorable for a launch, according to a forecast by the Space Force. Thursday is a rescue day if something goes wrong.

The launch will add another 60 Starlink satellites to the SpaceX constellation, bringing the number to 422 – by far the largest known satellite network.

The coronavirus pandemic has prompted NASA and the Space Force to prevent most audiences or the media from watching recent launches. Staff should work from home, if possible, but in-person launch operations are considered essential for the missions.

NASA and Space Force officials said they were taking every precaution, including rotation of launch teams, restriction of interaction between these crews and the more distant position.

The planned launch of the satellite comes as SpaceX prepares for the launch in late May of the first crewed flight of NASA astronauts from American soil since 2011.

Astronauts Bob Behnken and Doug Hurley are to board a SpaceX Crew Dragon capsule to the International Space Station.

The booster for the SpaceX launch on Wednesday has been used three times, including the first complete unmanned test flight from the Crew Dragon capsule to the space station in March 2019. SpaceX said it had completed a test launch on Friday of the Mission Falcon 9 rocket.

For Wednesday’s launch, one of the fairings, or rocket cone halves, was previously used to launch a commercial satellite in August, said SpaceX.

During its last Starlink launch, SpaceX announced via live broadcast the results of an experiment: that a non-reflective coating on a single Starlink satellite in orbit makes it notably less visible from the ground.

Astronomers have complained that Starlink satellites make it much more difficult to make observations from telescopes on the ground.

SpaceX is now announcing its intention to try a new experience: installing a sun visor on a satellite during an upcoming launch. The company did not immediately respond to requests for additional information about this experience.

The Starlink satellites are roughly the size of a large dinner table, each weighing over 500 pounds.

The latest information on the commercial satellite industry 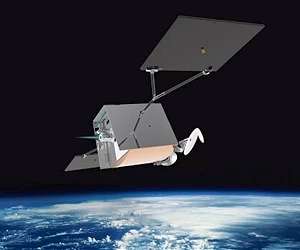 The OneWeb satellite system was an initial planned constitution of 650 satellites which was under construction with 74 satellites already in orbit. The objective was to provide broadband Internet services via satellite on a global basis. The first services were to begin in 2021. OneWeb was headquartered in London, England, with offices in the United States, the United Arab Emirates and Singapore.

OneWeb suddenly declared bankruptcy on March 27, 2020 and laid off most of its employees. The company maintains its satellite operation… read more

Metro Vancouver buildings could shake more than expected if ‘Big One’ strikes: study

Kenney calls on Albertans to be ‘responsible’ when they protest, but doesn’t condemn large gatherings

Surgeon with free beds and medical supplies says he can help...

Undocumented immigrants can now get professional licenses from NJ as Murphy...

These 3 actions have a decisive advantage

As Fauci pleads for Americans to keep their distance, Trump talks...

SKF consolidates its manufacturing and organizational structure in France | ...