Princess Anne allowed a rare look at her life in a new frank interview with Vanity Fair, to celebrate her 70th birthday in August.

The only daughter of Queen Elizabeth II spoke of the difficulty of having a title and also gave an overview of the differences between how those of her generation in the royal family approach issues such as philanthropic initiatives, contrasting with the the way the young royals do things.

Anne described herself as “the boring old fuddy-duddy in the back saying,” Don’t forget the basics. “

“I don’t think this young generation probably understands what I used to do in the past and that is often true, right? Anne told the magazine.

“You don’t necessarily look at the previous generation and say,” Oh, did you do that? “Or,” Did you go there? “Nowadays, they’re looking for a lot more:” Oh, let’s do it in a new way. ” She continued, before describing her attitude towards any new idea.

“And I’m already on the scene,” please don’t reinvent this particular wheel. We went there, we did it. Some of these things don’t work, ”she said. “You may have to get back to basics. »»

Although the princess did not name names, her comments likely hint at Prince Harry and Meghan Markle, who announced their withdrawal from the royal family in January and officially left on March 31. The couple, who now divide their time between the United Kingdom and North America, recently corroborated information from the Telegraph that they are launching their own non-profit organization, which will be called Archewell.

It seems that Anne again made reference to Harry, her nephew and Meghan – and expressed support – when she spoke of not giving her own children her Royal Highness titles at birth. The Duke and Duchess of Sussex also did not give their son Archie Harrison Mountbatten-Windsor an HRH title.

As Vanity Fair reporter Katie Nicholl notes in her story, her interview with the princess took place a month after Harry and Meghan said they would give up – but not lose – their titles His and Her Royal Highness . 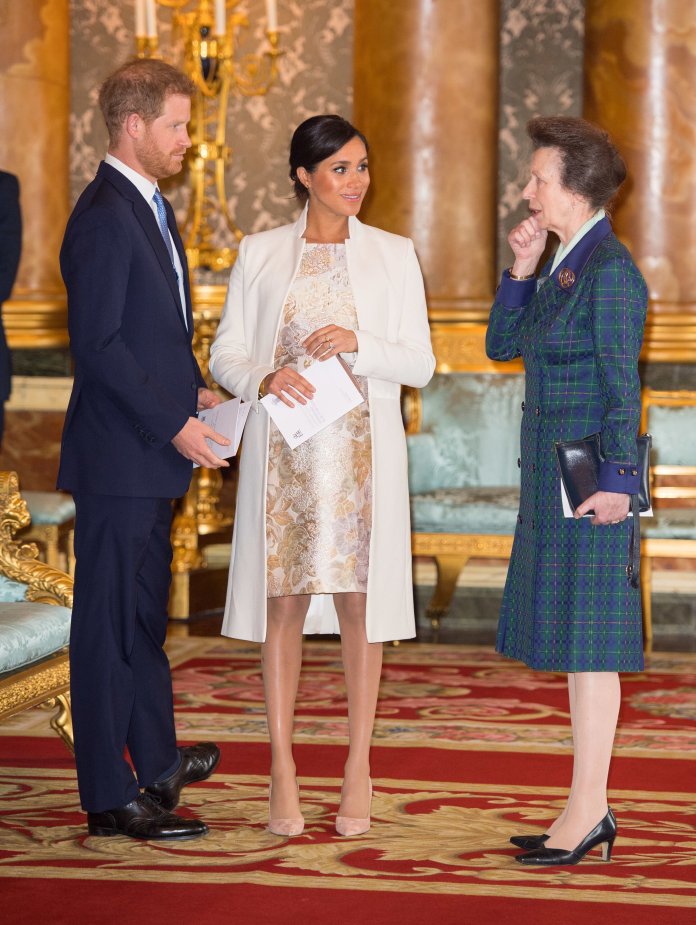 The Duke and Duchess of Sussex and Princess Anne attend a reception to mark the 50th anniversary of the inauguration of the Prince of Wales – Anne’s brother – at Buckingham Palace on March 5, 2019.

The interview also made reference to a recent moment that caught Anne’s global attention.

In December, she appeared to ignore interaction with President Donald Trump at a royal reception for the NATO summit in London, and was later accused of laughing at Trump with other world leaders.

Princess Anne responds with a shrug when the Queen waves after greeting President Donald Trump and First Lady Melania.

The world leader was invited to meet the royal family at the NATO summit in London https://t.co/yAJDagcU0Epic.twitter.com/8GYnGe7IVc

A Press Association report later denied any intentional shrug on his part or his efforts to mock, and an anonymous source told Vanity Fair that Anne was “unhappy to be dragged into this particular story “

“She has always been careful not to be considered political in any way,” added the source. “She is also incredibly respectful, so any suggestion that she would make fun of someone behind her back was quite overwhelming for her. “

To learn more about the interview, visit Vanity Fair.

MTV forced me to quit The Challenge

‘We love you’: rock star Bryan Adams thanks BC hospital for caring for his mother

Surprise! Another veteran has a problem with Riddle

Up to 1,500 jobs at risk at WHSmith after customer decline | Economic news

The epidemic of sars coronavirus in Beijing under control, according to a chinese expert...