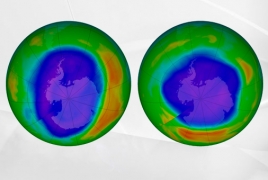 PanARMENIAN.Net – The largest hole ever observed in the ozone layer over the Arctic has closed, according to Copernicus’ atmospheric monitoring service, according to euronews.

Scientists spotted signs of a rare hole at the end of March, and it appears to be the result of low temperatures at the North Pole.

The ozone layer protects the Earth from most of the sun’s ultraviolet rays, which is a major cause of skin cancer.

The record hole would not have posed a direct threat to humans if it had moved further south to populated areas.

But on Thursday April 23, Copernicus – the EU’s land monitoring program – announced that the hole was now closed.

The closure has nothing to do with reducing the pollution caused by much of the world on the COVID-19 lock.

Instead, it is the polar vortex, the high altitude currents that normally bring cold air into the polar regions. This split in two, giving the Arctic region a relative heat wave, with temperatures up to 20 ° C above normal for this time of year.

Pep doesn’t look in front of the palace

More than half of American voters think Donald Trump is racist

How The Gambia grapples with a gruesome past under Yahya Jammeh

Ontario students will return to school full-time in the fall, with...

Teenagers find a new way to fight alcohol during a pandemic:...

Did Neymar play his last game for PSG? The Brazilian could...