Belgium has the highest number of daily coronavirus deaths per capita of any country in the world – but the ministers say it is only because they are more transparent with their data.

The European nation reported 4,857 deaths from coronavirus on Thursday, and an increase of 417 in 24 hours, despite a relatively small population of 11.6 million.

But, unlike many of its European neighbors, it counts deaths outside the hospital and deaths where the patient had symptoms of coronavirus but had not been tested in these figures.

These deaths account for almost half of Belgium’s total, which means that the real scale of coronavirus deaths in other countries could be double the official figures if this trend is repeated elsewhere. 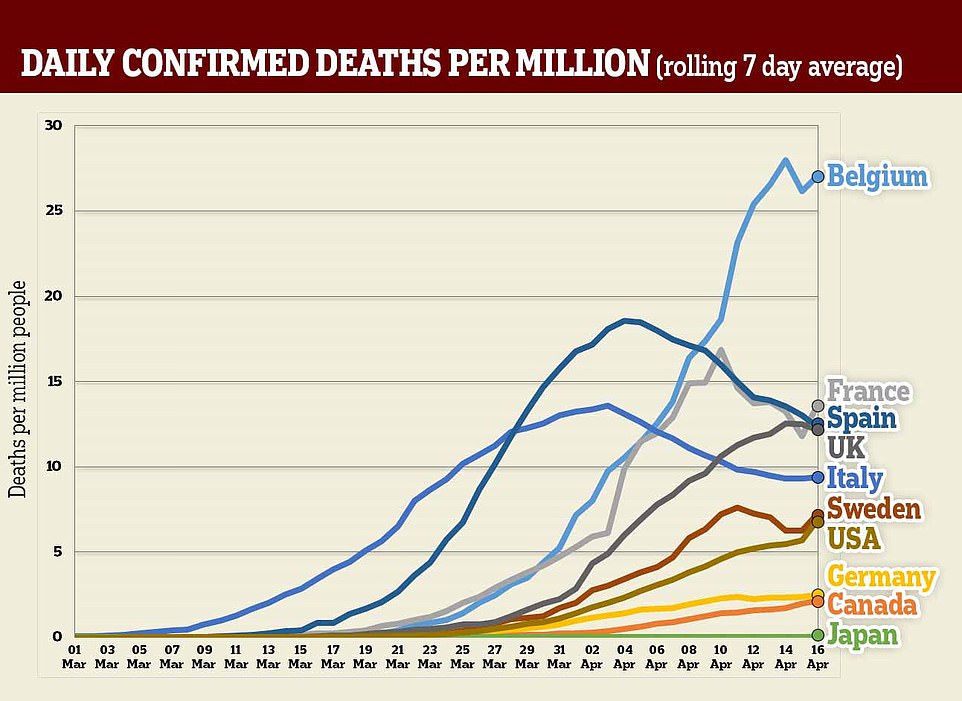 A graph showing the number of coronavirus deaths per day in countries relative to the size of their population. The line represents a seven-day moving average, which means it shows trends in the data rather than specific numbers. He reveals that Belgium has the highest rate in the world, but the minister says it is because they are more transparent with their data 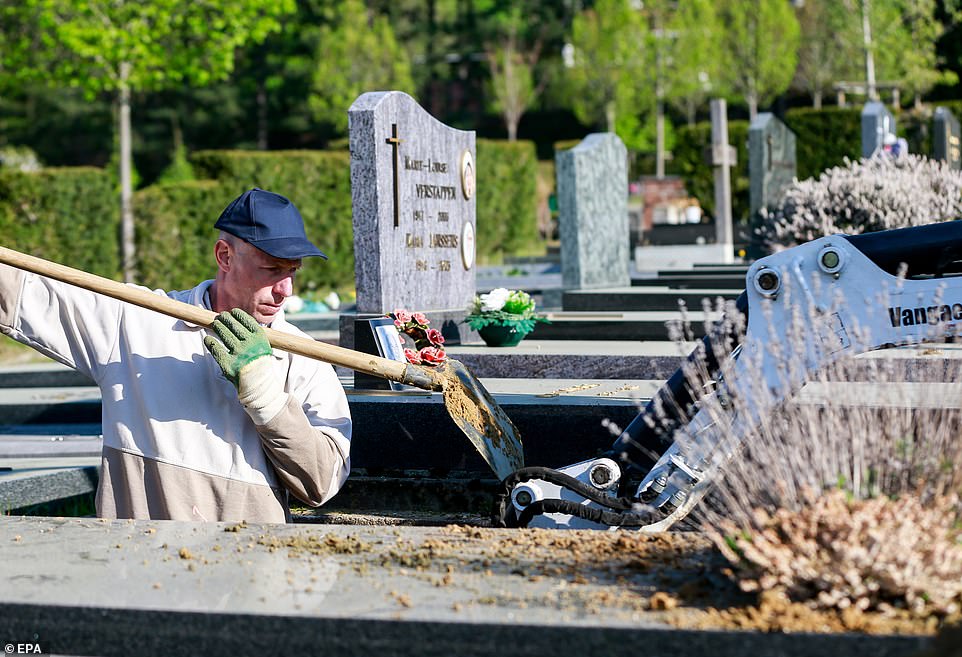 A gravedigger prepares a grave for burial at Verrewinkel cemetery in Brussels, Belgium, where work has tripled since the start of the coronavirus pandemic

In fact, Belgium is currently considering producing a second lower daily total, which means it can be compared fairly with its European neighbors, reports the Wall Street Journal.

According to the latest report from the Belgian Federal Public Health Service, barely 49% of the total official deaths in the country have occurred at the hospital where cases of coronavirus have been confirmed.

49% died in nursing homes, while around 1% died in home or elsewhere.

Of the deaths in nursing homes, 94% had not been diagnosed with coronavirus but had suspicious symptoms.

This means that the total death toll in the country would have almost halved if he had used the same methods as other European nations.

“In Europe, no country counts like the others. We have the most detailed method, “said Belgian Minister of Health Maggie De Block to the television news channel LN24.

It occurs after repeated warnings from officials in France, Spain, Italy and the United Kingdom that deaths in nursing homes are being ignored, leading to a “hidden epidemic”.

In the UK alone, 4,000 people are believed to have died from coronaviruses in their homes and are not among the country’s 13,729 deaths.

A month ago, the mayor of the Italian city of Bergamo – at the epicenter of the country’s epidemic – issued a similar warning about nursing homes. 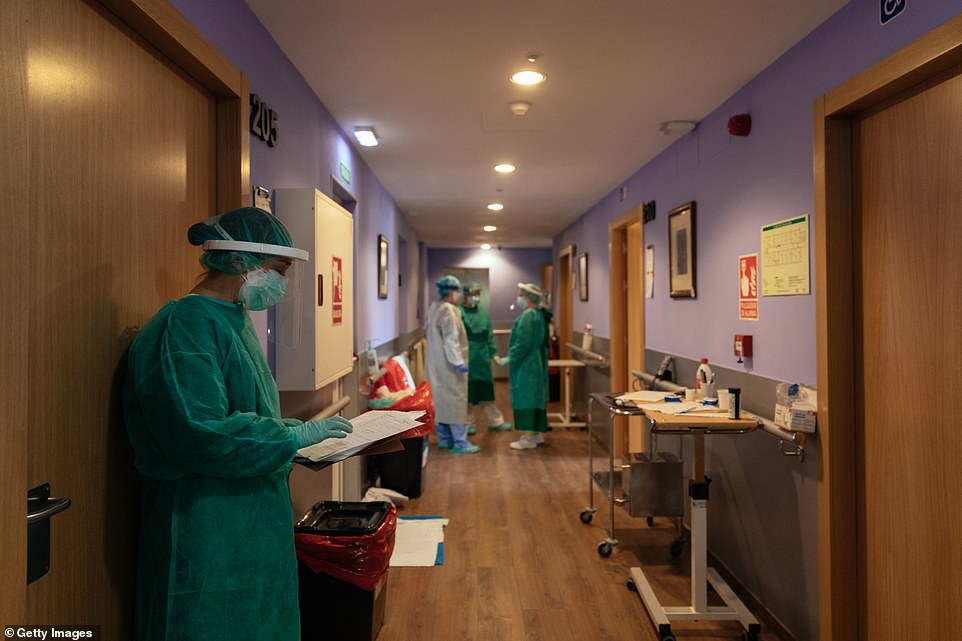 Medical staff meet for a briefing in the hallway of a nursing home in Huesca, Spain, where 46 patients with coronavirus were treated on April 16 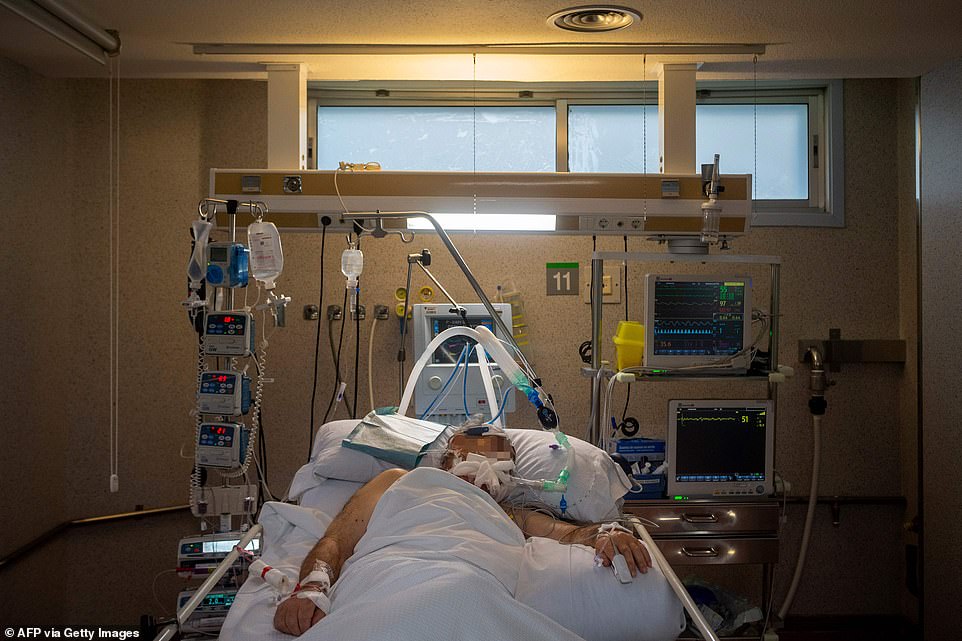 Elderly coronavirus patient on April 16 in the intensive care unit of a hospital in Vigo, in north-west Spain

“There are a significant number of people who have died but whose deaths have not been attributed to the coronavirus because they died at home or in a nursing home and therefore were not taken, “said Giorgio Gori.

Until the beginning of April, France had also omitted nursing home data from its official count – before declaring an additional 1,416 deaths in nursing homes on April 3.

However, the figure was released with the caveat that a third of nursing homes have yet to release data.

Meanwhile, regional government data released in Spain suggests that 57% of the country’s deaths from the virus between March 8 and April 8 occurred in nursing homes, The Guardian reported.

Some doctors in Belgium have complained that deaths caused by hypertension, diabetes, cardiovascular disease and other causes have been grouped into the COVID-19 category.

However, Emmanuel Andre, spokesperson for the national health authorities, insisted that the large Belgian method of counting “is necessary”.

The virus specialist explained that “the accepted practice is to take suspect cases into account” when monitoring the spread of an epidemic.

Deaths from COVID-19 that have been confirmed positive have so far been only about 5% of those reported by retirement homes, but Andre said an increase in testing in these facilities would increase the much more rate in the coming days.

It would also allow authorities to better measure the extent of the spread of COVID-19, he added. 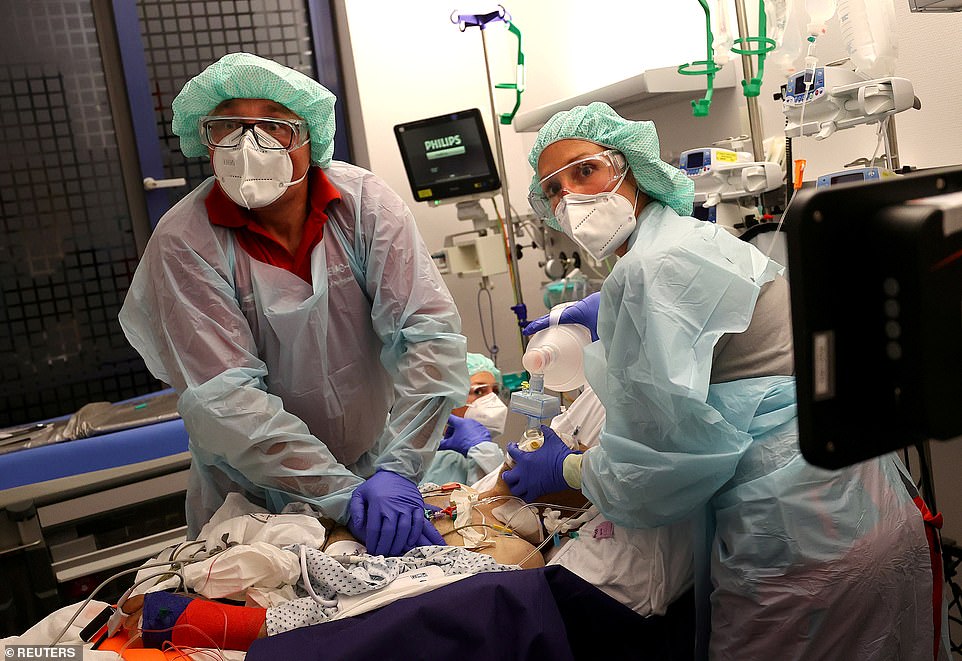 Doctor Katharina Franz and paramedic Andreas Hankel attempt to resuscitate a coronavirus patient at a clinic in Hanau, Germany

Sociologist Geoffrey Pleyers said “human, social and ethical tragedy” had happened “invisible, behind the walls” in retirement homes as Belgian officials focused on the ability of hospitals to provide intensive care to provide facing the pandemic.

“What proportion of deaths could have been avoided if people had been hospitalized” for other conditions, Pleyers asked in a comment published by the newspaper Le Soir.

The government plans to increase the number of coronavirus tests provided to retirement homes by ten.

But the goal of 210,000 kits “is not enough to test everyone,” said Vincent Fredericq, secretary general of Femarbel, the industry’s leading federation in French-speaking Belgium.

He said he cared for 160,000 residents across the country and employed 110,000 people who were also potential vectors of the virus.

“In the Brussels region, 95% of the staff use public transport, be it the metro, trams or buses, which are unfortunately good places to be contaminated,” noted Fredericq.

Police may deal with customers angry at vaccination passport system, BC Premier says – .

UFC 249: Justin Gaethje would have turned down the title fight on short notice if he had been against Khabib

Cam Newton’s different energy and leadership could lift the Patriots